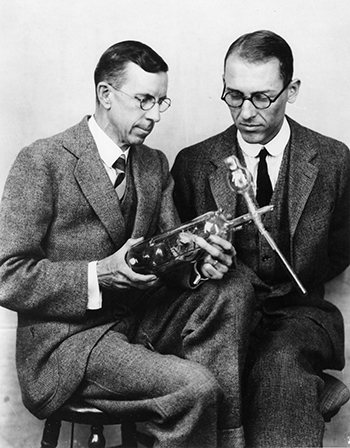 "At this site, the original location of Bell Telephone Laboratories, D. J. Davisson and L. H. Germer in 1927 performed the first direct demonstration of the wave-like behavior of elementary particles, predicted by L. de Broglie in 1923. The Davisson- Germer experiment provided crucial empirical evidence for the validity of the then rapidly evolving theory of quantum mechanics. In those years and subsequently many important scientific and technological discoveries were made at the same laboratory."

Bell Labs, the storied research and development engine for the U.S. and beyond, was launched in the 1920s. "It has its roots in the consolidation of several engineering departments within the American Telephone  & Telegraph (AT&T) company and the Western Electric company, the  manufacturing organization for the Bell System. These departments had been  tasked with overcoming the day-to-day engineering challenges of building a national communications network. But as large parts of that network were  deployed and the emerging telephone business took hold in the 1920s, attention  increasingly turned to exploring fundamental areas of science likely to shape  the future of the industry. As a result, about 4,000 of these scientists and  engineers were assigned to a newly created Bell Telephone Laboratories, Inc. in  1925, and were to be fully dedicated to such research."1  The Labs  were originally located in the West Village of Manhattan, in New York City.

Clinton Davisson, whose Ph.D. was from Princeton  University, was one of Bell Labs' early employees. Fascinated by the  developments of quantum mechanics, he had been following discoveries made in  this field very closely. In particular, Davisson was inspired by the work of  Louis de Broglie, a French physicist, who in 1923, had upon observing that light has some of the properties of  ordinary particles, simply proposed: If light can be a particle, why can't a  particle be a wave? de Broglie  constructed a theory extending the results to all particles. The de Broglie  hypothesis implied that wave behavior was a universal property of matter.

In 1925, Davisson and his  Bell Labs partner Lester Germer began a series of experiments that would,  within two years, confirm de Broglie's hypothesis of the wave nature of matter.  In recognition of this important discovery, APS honored the location of the experiment as part of its Historic Sites Initiative. In May 2011,  Curt Callan, President of APS, presented a plaque to Jeong Kim, President of  Alcatel-Lucent Bell Labs, which reads: "At this site, the original location of Bell Telephone Laboratories, C.  J. Davisson and L. H. Germer in 1927  performed the first direct demonstration of the wave-like behavior of elementary particles, predicted by L. de  Broglie in 1923. The Davisson-Germer experiment provided crucial empirical  evidence for the validity of the then rapidly evolving theory of quantum  mechanics. In those years and subsequently many important scientific and  technological discoveries were made at the same laboratory."

Spurred by this work, "Davisson  and Germer designed and built a vacuum apparatus for the purpose of measuring  the energies of electrons scattered from a metal surface. Electrons from a  heated filament were accelerated by a voltage and allowed to strike the surface  of nickel metal."2

"The electron beam was  directed at the nickel target, which could be rotated to observe angular  dependence of the scattered electrons. Their electron detector (called a  Faraday box) was mounted on an arc so that it could be rotated to observe  electrons at different angles. It was a great surprise to them to find that at  certain angles there was a peak in intensity of the scattered electron beam.  This peak indicated wave behavior for the electrons, and could be interpreted  by the Bragg law to give values for the lattice spacing in the nickel crystal."3  The experiment showed that electrons behaved like waves, in that they  exhibited a diffraction pattern when they scattered off the crystalline structure  of the nickel target. It was 1927, in room 7B of Bell Labs, and Davisson and  Germer had just proven one of the underlying principles of quantum  mechanics.

For his part on the discovery,  Davisson received the Nobel Prize for Physics in 1937, for "experimental  discovery of the diffraction of electrons by crystals." He shared it with British physicist George Paget Thomson, who had  discovered the same phenomenon with a different experimental arrangement. Davisson  continued his investigations, in which, among other achievements, he contributed  directly to the development of the electron microscope.

Today, the legacy of the  dynamic duo of Davisson and Germer lives on. The APS Davisson-Germer Prize in  Atomic or Surface Physics is awarded in alternate years in the areas of  condensed matter physics, and atomic, molecular, and optical physics. It was  established in 1965 by AT&T Bell Laboratories with additional support from  the Chope Family Trust.

Of course the innovations that emanated from Bell Labs  continued and blossomed, including others that have been recognized with APS  historic site plaques. In 1970, Bell Labs moved to its larger, current location  in New Jersey, and the West Village site of Bell Labs was converted to the  Westbeth Artists Residence. No one is exactly sure where in the Residence the  old room 7B is, but Callan promised, "When we find out where in Westbeth  that was, we'll put a plaque there, too."