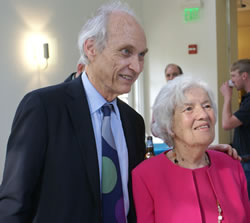 The Department of Terrestrial Magnetism (DTM) is the site of work in the 1970s by Vera Rubin and Kent Ford on the rotation curves of galaxies, which provided early evidence for the existence of dark matter. Above, Michael Turner congratulates Vera Rubin. 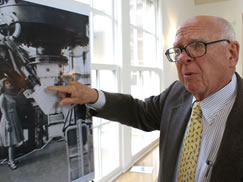 Kent Ford shows where a key component, the image tube spectrograph, was located in a photo of the two of them inspecting the telescope at Kitt Peak where the data were taken.

Terrestrial Magnetism is just one of many departments at the Carnegie Institution for Science. Located in Northwest Washington, DC, the department was founded in 1904 to map the geomagnetic field of the Earth, and has since played a major role in interdisciplinary research that spans astronomy, cosmology and geosciences, from the search for exoplanets, to analysis of the age and structure of the universe, to the causes of earthquakes and volcanoes. But it was the unexpected discovery of dark matter by two of its scientists, Vera C. Rubin and W. Kent Ford, Jr., in the 1970s that helped solidify its stellar reputation and that of its scholars as trailblazers in our understanding of the cosmos.

And so it was on May 17, 2013, when APS President Michael Turner presented a plaque to the Department of Terrestrial Magnetism (DTM) of the Carnegie Institution for Science, as part of the APS Historic Sites Initiative, in celebration of this breakthrough. The citation reads “In recognition of the pioneering research of Vera C. Rubin and W. Kent Ford, Jr. of the Carnegie Institution’s Department of Terrestrial Magnetism, whose measurement of galactic rotation curves provided evidence for the existence of dark matter.”

Rubin’s interests in astronomy harken back to her days as a young girl growing up in Washington, DC. “I “I became an astronomer because I could not imagine living on Earth and not trying to understand how the Universe works,” she noted in her biography.i She received a scholarship to Vassar, where she graduated as the only astronomy major in 1948. When she applied to grad school, she was informed that “Princeton does not accept women” in the astronomy program. (That policy was not abandoned until 1975.) So instead she headed north to Cornell, where she ended up studying under Philip Morrison, Richard Feynman, and Hans Bethe and received her Master’s degree. Rubin then went back to DC and earned her Ph.D. in 1954 from Georgetown University while working under George Gamow (who was at George Washington University).ii

In 1965, Rubin took a position with DTM, which at the time was already known as an experimental physics laboratory. She soon encountered Kent Ford, Jr., who as a young member of the staff, had just designed and constructed an image tube spectrograph.iii “This state-of-the-art instrument allowed telescopes to observe objects that were many times fainter than those that had previously been studied.”iv Ford’s spectrograph was installed on the 2.1-Meter telescope on Kitt Peak in Arizona.

In the 1970s, Rubin and Ford launched a project to observe and measure the mass of spiral galaxies. They started with spiral M31, the Andromeda Galaxy, and hoped to determine the distribution of mass from the orbital speeds of stars and gas at different distances from the galactic center.v While analyzing the data from M31 and other spirals, they were surprised to discover something completely unexpected. The stars far from the centers of galaxies, in the sparsely populated outer regions, were moving just as fast as those towards the center. “This was odd, because the visible mass of a galaxy does not have enough gravity to hold such rapidly moving stars in orbit. It followed that there had to be a tremendous amount of unseen matter in the outer regions of galaxies where the visible stars are relatively few. Rubin and Ford went on to study some sixty spiral galaxies and always found the same thing. ‘What you see in a spiral galaxy,’ Rubin concluded, ‘is not what you get.’”vi

Although Rubin and Ford were not the first to propose the existence of dark matter (Fritz Zwicky estimated its existence in 1933), they were the first researchers to proffer solid evidence of dark matter from their significant measurements of the rotational rates of galaxies.vii However, “many astronomers were initially reluctant to accept this conclusion. But the observations were so unambiguous and the interpretation so straightforward that they soon realized Rubin had to be right.”viii

For their ground-breaking research, the team received many honors and awards. In 1985, Ford was honored with the James Craig Watson Medal from the National Academies of Science “For his work in the area of image enhancement and galactic dynamics, which has contributed greatly to the characterization of the unseen matter in galaxies.” Rubin received the same honor in 2004 “For her seminal observations of dark matter in galaxies, large-scale relative motions of galaxies, and for generous mentoring of young astronomers, men and women.”ix She has also been honored with a number of other highly-regarded awards, including the National Medal of Science - the nation's highest scientific award - for "her pioneering research...which demonstrated that much of the matter in the universe is dark..." She was elected to the National Academy of Sciences in 1981, and in 1996 she became the first woman to receive the Royal Astronomical Society's Gold Medal since Caroline Hershel, who was awarded the prize in 1828. Among her other honors, Rubin was chosen to be the American Astronomical Society's Henry Norris Russell Lecturer in 1994, she won the Cosmology Prize of the Peter Gruber Foundation in 2002, and in 2003 she received the Catherine Wolfe Bruce Medal from the Astronomical Society of the Pacific.x

In the November 2013 issue of Smithsonian Magazine, the spectrograph was named one of “101 Objects that Made America.” It is now a part of the Smithsonian Institution’s permanent collection in the Air and Space Museum.xi