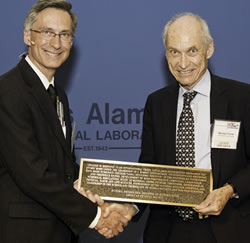 On July 22, APS President Michael Turner (right) presented a plaque to Los Alamos National Laboratory Director Charles McMillan.
Los Alamos National Laboratory (LANL) is probably the most famous federal government laboratory. Synonymous with both clandestine and well-known paradigm-shifting research, it is most recognized as serving as the birthplace of the atomic bomb. But its overarching contributions to modern science and engineering in myriad fields cannot be denied. On July 22, 2013, APS President Michael Turner presented a plaque to LANL Director Charles McMillan, to recognize the many scientific achievements of the Laboratory since its founding in the midst of World War II.

Presented as part of the APS Historic Sites Initiative, the plaque reads: “Created in response to an international crisis, Los Alamos successfully developed the atomic bomb under the leadership of J. Robert Oppenheimer. Its scientists and engineers have made numerous contributions, including discovery of the neutrino by Clyde Cowan and Frederick Reines, development of high-performance computing, large scale numerical simulations, study of material under extreme conditions, integration of physical, earth and life sciences, stewardship of the national nuclear stockpile, and leadership in the science and technology of global security and non-proliferation.”

In the early part of World War II, the United States had grave concerns over the threat of a growing German nuclear research program. To combat this potential danger, the federal government commissioned the United States Los Alamos Laboratory, originally known as Project Y. Its mission was simple: beat the enemy and develop an atomic weapon. The lab was to serve as the centralized location of all research associated with the Manhattan Project.

First on the agenda: A top-secret, remote (and yet accessible) location was needed, that also had a clean water supply and an available workforce. Oppenheimer, scientific director, “envisioned a laboratory with a beautiful setting that would inspire his scientists.”i He was familiar with Los Alamos, then a tiny speck of a town, and the Los Alamos Ranch School, because he owned a ranch in the Sangre de Cristo Mountains and had spent time exploring the nearby Jemez Mountains.

Together with General Leslie Groves, military head of the project, they chose the mesa of Los Alamos as the site of the Lab. Originally intended to house 30 scientists, the facilities soon swelled to more than 6000 residents at the height of the War. Although the facilities were overseen by the Army, an agreement was soon reached whereby the University of California was contracted through the War Department to operate the Lab. Oppenheimer recruited physicists, chemists, metallurgists and explosive experts, including several Nobel Prize Laureates to work on the project which took over two years. Some of the most famous physicists in the 20th Century participated in the research, including Fermi, Teller, Feynman, Bethe (who served as head of LANL’s Theoretical Division), and Rabi, who consulted and attended the nuclear test.

On July 16, 1945, the first nuclear test occurred on a site code-named Trinity in Southeastern New Mexico. “The bomb’s yield, equivalent of 18,000 tons of TNT, astounded even the scientists who had spent years making painstaking calculations.”ii President Truman was informed of the project’s success and within weeks, atomic bombs were dropped on Hiroshima (August 6) and on Nagasaki (August 9). Five days later, Japan surrendered, and World War II formally ended on September 2, 1945. “The Manhattan Project, a mission to end the war through the use of atomic weapons, had accomplished its goal.”iii

In the years since, LANL has remained wedded to its national security origins and has become a bustling beehive of extraordinary research and development. Today, the Lab, no longer a secret, and the address of which is no longer relegated to a single post office box in Santa Fe, employs nearly 10,000 people and the town of Los Alamos has one of the best school districts in the United States. The Laboratory was declared a National Historic Landmark in 1965, and continues to generate breakthroughs in basic research as well as cutting-edge technologies and innovations in areas as diverse as bioinformatics, quantum and high-performance computing, nanotechnology and advanced materials, astrophysics, alternative energy systems and high energy applied physics and theory.iv