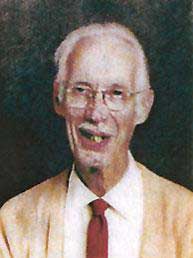 George Evered Duvall was born in Leesville, LA on Feb. 6, 1920. His family moved to Oregon where he spent his youth. He attended Oregon State College before World War II but his studies were interrupted in 1941 when he joined the University of California’s Division of War Research working on underwater acoustics problems. After the war he returned to Oregon State and completed his BS in Physics in 1946. He did his doctoral work at the Massachusetts Institute of Technology completing a PhD in Physics in 1948. His first job after school was at General Electric Co. where he was a staff physicist for two years before becoming head of the theoretical group.

Dr. Duvall left GE in 1953 to become a senior physicist at the Poulter Laboratories at the Stanford Research Institute. He became science director of the Poulter Laboratories in 1957 and director of the laboratory in 1962. He built the Poulter Lab’s international reputation in the theoretical understanding of phenomena in the field of shock and detonation wave propagation. He also mentored a generation of distinguished research scientists. During his tenure at SRI, he became acquainted with Prof. William Band, Chairman of the Physics Department at Washington State University (WSU). This led to Dr. Duvall’s joining the staff in the Physics Department at WSU in 1964. He organized WSU’s Shock Dynamics Laboratory in 1968, establishing a center of excellence for shock wave research. Prof. Duvall supervised the dissertation work of over 25 PhD students, many of whom have become distinguished in the shock wave community since. Prof. Duvall understood his role as a mentor for these students in exquisite detail. He received the second Shock Compression Science Award in 1989 and gave his talk on leadership, education, and organization in the hard sciences. Among other things, he said this:

"It must be understood by both the teacher and the aspiring student that learning to be a scientist is not like learning to ride a bicycle, or to cook, or to be a bookkeeper. It is not something to be tacked on to an otherwise normal life. The science student is in the process of becoming a person who is different from the ordinary. The scientist sees the world in different terms, he evaluates things differently, and he often finds it difficult or impossible to communicate effectively with others who are not scientists. To be sure, he must learn a great many things that are contained in books, but ultimately he must acquire attitudes, abilities, and perspectives that are unique to science and which can be learned only by doing, observing, thinking, and interacting with practicing scientists."

Prof. Duvall engendered this behavior in a generation of shock wave scientists; this is now being passed onto the next generation of shock wave researchers by Dr. Duvall's students. His contributions to shock physics are inestimable - both in terms of his understanding of the subject in general and because he passed this understanding on to his students.

Prof. Duvall retired from WSU in 1988 after over 24 years as a teacher and mentor. He left a legacy that will not be forgotten. He passed away on Jan. 3, 2003 at the age of 83, having led a long and distinguished career in physics.

Prof. Duvall had a long and varied career studying various aspects of physics. During WW II  he studied underwater acoustics in a number of different aspects including piezoelectric properties of Rochelle salt, theoretical studies of scattering from refractive media (bubbles, wakes). His thesis at MIT was on the effect of transit time on shot noise in vacuum tubes. At GE he did theoretical work optimizing reactor design and invented the lattice test reactor which was later built by GE.

At the Poulter Labs at SRI in 1953 he began work on shock waves as a senior physicist. Early efforts involved the thermodynamic and hydrodynamic aspects of shock propagation. In 1957 George became the Science Director of Poulter Labs and, working with other staff members, he did work in many areas. Specific topics include hydrodynamic attenuation, material strength effects, optical techniques for free surface measurement, instabilities and multiple wave interactions, rate effects, studies on porous materials, impact welding, and detonation propagation. In 1962 he became the Director of the Poulter Labs and oversaw the entire shock and detonation wave effort.

During his time at Washington State University, he and his students have made contributions in the following areas: shock-induced phase transitions and the incorporation of kinetic effects, nonlinear wave propagation in lattices, understanding of atomic mechanisms controlling inelastic deformation in shocked crystals, equation of state of solids and liquids, electrical and thermoelectric measurements under shock loading, timeresolved studies to understand shock-induced chemical reactions. Some of these areas were pioneered by Duvall and his students, while in other areas important questions relating to shock phenomena were resolved.