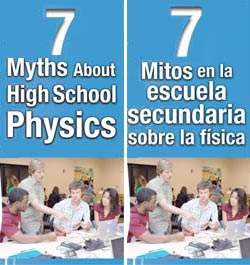 Did you know we released a new brochure in 2020? Check out the updated brochure and website here!

The “7 Myths About High School Physics” brochure is a resource for physics advocates. It helps address harmful preconceptions that students and those advise them often have about physics. These include:

The “7 Myths” brochure is intended for high school students and anyone who advises them―teachers, guidance counselors, parents, and others. If you know someone with negative perceptions of physics, we recommend you use the brochure as a conversation starter.

Order Your Brochure - English or Spanish

Promoting the “7 Myths” Brochure
APS and the American Association of Physics Teachers (AAPT)  have created an information sheet of simple strategies for using the "7 Myths" brochure most effectively. Check it out!

Behind the 7 Myths: 7 Facts

Like to be even better informed? Here are the 7 physics facts behind the physics class myths.

“College admissions is never just about the GPA. We are interested in seeing that students have maintained an excellent college prep curriculum. A transcript with physics is better than one without it.”

“Highly selective colleges and universities look for students who have taken a very demanding program in high school, which includes courses such as physics. The rigor of the program is often more important than the final grades they get.”

FACT #2:
Physics answers questions about the world and opens doors to potential careers.
Have you ever wondered why the sky is blue, or why the earth is warming? Only physics can tell you the answer! And if you’ve ever thought about being a doctor, engineer, or patent attorney, you will need physics.

APS’s “Why Study Physics” web page and the APS/AAPT “Why Physics” poster discuss questions answered by physics, and careers that require physics.

FACT #3:
Physics can be taught at a variety of levels.
According to American Institute of Physics (AIP) data, national enrollments have been growing rapidly in high school courses taught at both conceptual and advanced levels.

FACT #6:
Physics is fundamental to other sciences and technological innovations; physics teaches critical thinking and problem-solving skills.
Physics underpins almost every other science. Anyone thinking of studying chemistry, biology, geology, or astronomy will need a strong a background in physics.

Physics also teaches problem a wide range of skills that are applicable no matter what you end up doing. Physics majors working in computer science or engineering reported that they made frequent use of problem-solving, teamwork, programming, and technical writing skills they learned studying physics.

APS’s “Why Study Physics” web page offers more information on the advantages of being a physicist. 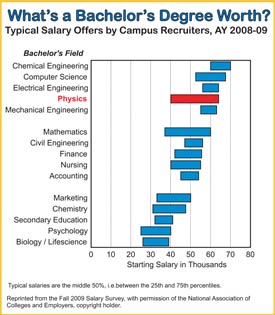 FACT #7:
Physics opens doors to many careers; physics majors have high employment rates and are well paid.
Did you know that only around a third of physics majors go on to graduate school in physics or astronomy? The rest go on to study other subjects, or become doctors, lawyers, engineers, teachers, or a wide variety of other careers. The unemployment rate of physics majors is far lower than that of the general population.

The APS website has many physics career resources for students.

Other Resources for Physics Advocates

Increasing Physics Enrollment in Your School
Earl Barrett in The Physics Teacher, Vol. 47

7 Myths Brochures
The "7 Myths" brochures (English and Spanish) may be ordered directly from the APS Physics online store.

The “7 Myths” brochure was developed by a team of staff members from APS, the American Association of Physics Teachers (AAPT), and the Society of Physics Students (SPS).