U.S.-Russian Nuclear Reductions After New START: Summary of a Workshop Exploring Next Steps

This paper is a summary of a workshop that was held to explore possible reductions in tactical nuclear weapons. The workshop was co-sponsored by the U.S. Department of State, the American Physical Society Panel on Public Affairs (POPA), and the Center for Strategic & International Studies (CSIS). The project was overseen by a joint APS-POPA & CSIS Steering Committee, which was responsible for inviting the participants and organizing the workshop. 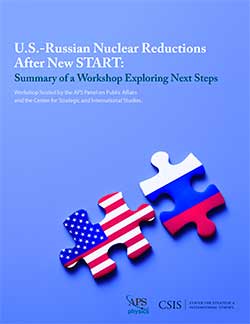 The reduction of NSNW is burdened by several issues. There are substantial conventional force and nuclear force asymmetries — Russia has thousands of NSNW and the U.S. has hundreds. An additional complication is that while non-nuclear NATO states have varying opinions as to the utility of the U.S. NSNW, many, particularly the newer members, view the weapons as an assurance of U.S. commitment to their security. Indeed, some regard U.S. deployment of NSNW in Europe as the final and irreplaceable assurance of Washington’s commitment to their security.

To explore the texture of the various challenges associated with reductions of NSNW, CSIS and the APS proposed an experiment: a discussion of policy and technology options in the context of a hypothetical agreement between the U.S. and Russia. The Department of State supported the concept and on February 25th and 26th, CSIS and APS convened a group of approximately thirty policy and technology participants drawn from the U.S., Europe and Russia, and asked them to explore what would be necessary to implement and to verify the hypothetical treaty, “Withdrawal of U.S. NSNW to the American mainland and withdrawal of Russian NSNW behind the Urals.”