Readiness of the U.S. Nuclear Workforce for 21st Century Challenges 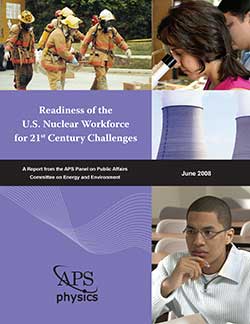 It is time to reexamine the adequacy of the U.S. nuclear workforce and its ability to deal with many old and new challenges our nation faces. This report draws attention to critical shortages in the U.S. nuclear workforce and to problems in maintaining relevant educational modalities and facilities for training new people. This workforce comprises nuclear engineers, nuclear chemists, radiochemists, health physicists, nuclear physicists, nuclear technicians, and those from related disciplines. As a group they play critical roles in the nation’s nuclear power industry, in its nuclear weapons complex, in its defense against nuclear and other forms of terrorism, and in several aspects of healthcare, industrial processing, and occupational health and safety.

Today there is increasing public concern about anthropogenic global warming and global climate change, and much public anxiety about future sources of abundant but clean (low “carbon footprint”) energy. About 20% of the electricity in the U.S. comes from its fleet of 104 commercial nuclear reactors, which annually displace hundreds of millions of metric tons of carbon emissions. In the U.S., it has been over three decades since a nuclear reactor began construction. Today’s increasing demand for clean, affordable energy demands renewed positive emphasis on nuclear power.

There are likely to be severe shortages of nuclear scientists, engineers and technicians in governmental sectors responsible for regulatory, safety, and emergency responses of national concern (e.g. nuclear power industry, transportation and shipping). It is clear that Federal and state governments must train and maintain this workforce.

Reduced university-based training opportunities in nuclear science and engineering have not had a dramatic effect on the manpower levels in the nuclear weapons complex. Moreover, the design and construction of nuclear weapons will never be a part of publicly-available nuclear science and engineering curricula. Rather, on-the-job training has filled workforce needs. However, expanding efforts in nuclear forensics and other parts of the Homeland Security portfolio and replacing retirees across all sectors will require a significant number of talented, well-trained nuclear engineers, nuclear physicists, nuclear chemists, radiochemists, health physicists, mathematicians, and computer scientists at the Ph.D. level.