Every day, world-class researchers across Rochester, New York are helping lead our nation and the world toward the next great scientific breakthrough. Just a few months ago, our understanding of the universe leapt forward when gravitational waves were detected for the very first time, marking one of the most significant scientific discoveries in a century. This discovery, which helped confirm Albert Einstein’s Theory of Relativity, was made possible thanks in part to six researchers from the Rochester Institute of Technology. This is just one example of the ground-breaking research being performed and why it is so important to continue investing in basic and applied science research.

Simply put, the United States must continue pushing the bounds of our collective knowledge by making these investments. Successfully performing both types of science in the 21st century requires Congress to prioritize investments at agencies like the National Institutes of Health (NIH), National Science Foundation (NSF), Department of Defense (DOD), and Department of Energy (DOE) Office of Science. These critical organizations are the framework that shape and sustain so much of the scientific community in our country.

Unfortunately, some members in Congress do not understand the value of investing in infrastructure — whether it is our physical transportation infrastructure or the intellectual highways on which we build and transmit knowledge. If we fail to act, it could take years to repair the damage and we cannot afford to lose this time.

That’s why I’ve spent my time in Congress fighting for investments in science and innovation. For instance, in addition to supporting the major national research institutions, I fight every year to ensure that the Laboratory for Laser Energetics at the University of Rochester has the resources it needs to continue its program, operations, and experiments on OMEGA and OMEGA EP lasers in support of the DOE. This work is not only bringing us closer to energy independence while enhancing our national security but also supports more than a thousand jobs in the Rochester region. The benefits that my community and our country receive from the laboratory vastly outweigh the cost of these investments.

I fought for 13 years to pass the Genetic Information Non-Discrimination Act (GINA) and started this fight in 1995 when the genomic era was still largely on the horizon. I knew then that genomic advances would not only hold the potential to improve health but also offer a new avenue for discrimination unless new protections were designed. When GINA was finally signed into law, it marked a new era in health care privacy and the late Senator Ted Kennedy called this bill the “the first civil rights bill of the new century.” We’re already seeing the important role this bill is playing in advancing cancer research today.

I’m bringing this same belief to my efforts to end to the under-discussed and unacceptable gender bias facing women in the science, technology, engineering, and mathematics (STEM) fields. This bias is often implicit and subtle, but it has a devastating impact on the research being done every day across the country. When women researchers are being driven from research, we are not only harming our sisters and daughters, but also the entire scientific community and our country. Quite simply, our nation cannot afford to waste the brainpower of its women.

That’s why I requested the independent Government Accountability Office (GAO) in 2013 examine the status of women in the federal grant writing process. The GAO’s findings, released just this past December, were staggering. The report outlined total inattention to this issue across four federal agencies including the NIH, DOD, DOE, and National Air and Space Agency (NASA). The study also found that two of the three agencies responsible for $17.1 billion of federal STEM funding — NIH and DOD — do not conduct legally required Title IX compliance reviews to ensure the universities they fund are addressing gender bias within their research programs. Unfortunately, this study confirmed what many of us already suspected to be true.

Since receiving this information, I’ve been working with these agencies to take immediate action and we’ve already seen results. The DOD has begun the process of implementing Title IX compliance reviews and changing its data collection practices. NASA is improving its data collection processes, and the Department of Justice has announced that it will convene quarterly discussions with the implicated agencies to discuss Title IX compliance activities. In April, the Department of Health and Human Services agreed to conduct legally-required Title IX compliance reviews to ensure the universities it funds are addressing gender based discrimination within their research programs. While these are steps in the right direction, the fight for gender equity in science is far from over.

In addition to opening up research to everyone, I am focused on ensuring that the benefits of science investments are felt in our local and national communities. For instance, Eastman Business Park in Rochester once witnessed innovative and groundbreaking work conducted by Kodak that taught the world, “you push the button, we do the rest.” Today, after a period of evolution, many of our region’s newest businesses are setting up shop at the park because of its unique capabilities and our region’s high-tech workforce.

Most recently, Rochester became home to the headquarters of AIM Photonics, a part of the National Network for Manufacturing Innovation, focused on integrative photonics. I worked for over three years to make AIM Photonics a reality after convincing many in Washington and across the government that photonics was a worthwhile investment. Already, photonics and optics companies in Rochester have contributed to the scopes and night vision that helped our Armed Forces take out Osama Bin Laden and the Somali pirates that captured Captain Phillips.

These discoveries and advancements are a reminder of why it’s so important for Congress to invest in science, research, and technology. Whether it’s basic or applied research, we must make sure that we are providing researchers — regardless of gender, race, sexuality, or background — with the support and infrastructure they need to build on this progress. The country that makes the most investments in research today will have the best ideas tomorrow, which is why I’m determined to keep the United States leading the way in these fields. I’m honored to work with you on this important goal.

Louise Slaughter is one of the most powerful women in Congress, a leading progressive voice in the House of Representatives and a stalwart advocate for her neighbors in Rochester. She was named the first female chair of the powerful House Committee on Rules in 2007. From this influential position, she helped shepherd many important and transformative bills through the House of Representatives, including the Affordable Care Act, the Lily Ledbetter Fair Pay Act of 2009, and the Student Aid and Fiscal Responsibility Act. She continues to serve on this committee as the highest-ranking Democrat. As one of the longest-serving female leaders of the House of Representatives, Congresswoman Slaughter has long been a prominent voice for women and diversity. She successfully fought for the passage of legislation that guarantees women and minorities are included in all federal health trials, established the Office of Research on Women's Health (ORWH) at the National Institutes of Health (NIH), and allocated the first $500 million in federal funding for breast cancer research at the NIH. Ten years after the creation of the ORWH, the NIH awarded her the “Visionary for Women’s Health Research” award. Congresswoman Slaughter also co-authored the landmark Violence Against Women Act.

She has also led the battle against every free trade agreement, including the North American Free Trade Agreement. To help hold government accountable, she passed the STOCK Act, which outlawed insider trading by members of Congress and their staff and introduced the Supreme Court Ethics Act, which applies a binding code of conduct to members of the U.S. Supreme Court.

The only microbiologist in Congress, Congresswoman Slaughter used her scientific knowledge and passion to pass the Genetic Information and Non-Discrimination Act (GINA). Her work on GINA was subsequently published in the Harvard Journal on Legislation.

Congresswoman Slaughter is also a visionary who wrote her master’s thesis on the problem of bacterial drug resistance decades before other scientists began to take this issue seriously. She carries on this work by championing the Preservation of Antibiotics for Medical Treatment Act, which would end the routine use of antibiotics on factory farms and curb the growing threat of antibiotic-resistant bacteria. 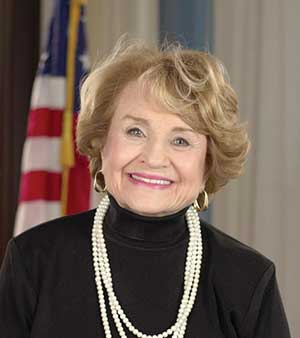