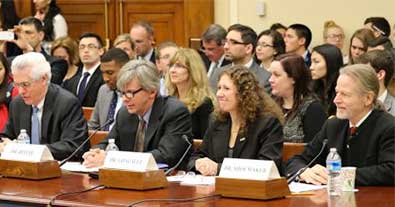 Photo: Democrats of the House Committee
on Science, Space, & Technology

Several comments during the House of Representatives Committee on Science, Space, and Technology’s Feb. 24 hearing on LIGO’s tremendous gravitational wave discovery took me by surprise.

First, Committee Chairman Rep. Lamar Smith (R-TX) praised LIGO during his introductory remarks, saying “The NSF’s support for the LIGO project is a great example of what we can achieve when we pursue breakthrough science that is in the national interest.”

That last phrase surprised me.

Smith sponsored a bill that passed the House recently titled “Scientific Research in the National Interest Act” H.R. 3293. This legislation prescribes that NSF, whose mission is to support basic science research, only fund scientific activities if they fall into one of seven categories that the bill classifies as “in the national interest.”

It’s unclear he would have found the fundamental research done decades prior to the LIGO announcement “in the national interest” based on his definition.

During the 1970s and 1980s, NSF funded Rainer Weiss’s initial investigations into laser interferometric techniques that ultimately formed the basis for LIGO, resulting in the construction of the NSF-funded facility in the 1990s.  The investment paid off in a huge way with the confirmation of the final, big prediction of Einstein’s General Relativity.

But would it have been funded if H.R. 3293 were in place? Would Smith deem Weiss’s research a satisfactory fit for one of the categories?

The White House Office of Science and Technology Policy (OSTP) put out a comment in opposition to this bill.  Along with noting that the NSF gold-standard merit review process already works to select the best proposals for federal investment, the OSTP document states that “most of the criteria offered by the bill for determining whether an award for basic research is in the national interest are not applicable to basic research at all—they relate to whether the research will increase economic competitiveness, increase health and welfare, strengthen the national defense, and so on, and, thus, they are applicable only to applied research.”

Although Smith said LIGO was an example of science “in the national interest,” his first question to the witnesses after their statements asked about the discovery’s practical applications. While I had expected this question from him, I hadn’t expected it following the context of his opening statement. Was he separating “practical application” from “national interest” (which would seem at odds with the wording in the bill)? Was he asking how it fit in with his criteria?

Of course, as with many basic research discoveries, we don’t know the answer to his question yet. In response, the witnesses discussed some important consequences stemming from the scientific processes used to reach this discovery.  One aspect was innovation. To get the precision needed to measure a detection involving the size of one billionth of one billionth of a meter, technological advances had to be made. Another was workforce development. People had to handle the vast amounts of data generated by the experiment, resulting in many data science experts. A long list of companies was rattled off during the hearing where LIGO graduate students had found employment as data analysts when they finished their degrees. Yet another was education, a subject addressed by Reps. Elizabeth Esty, Suzanne Bonamici and Barbara Comstock. The LIGO team has developed education materials and programs to help with understanding this important discovery, and the science behind it, with a goal of informing and inspiring a diverse STEM workforce.

As the witnesses illustrated, all of these examples show the importance of supporting this type of research—it’s not only about advancing scientific knowledge, but also the societal benefits and developments that come with the process.  That certainly, by anyone’s criteria, is in the national interest.