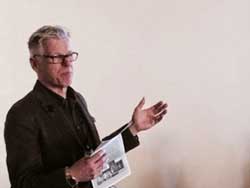 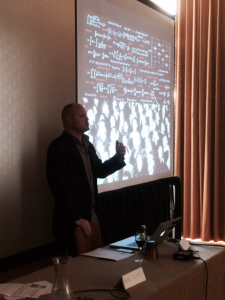 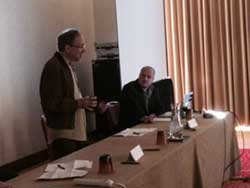 In an effort to continue a dialogue with APS membership about the critical need to communicate why scientific research is valuable to the lives of Americans, the APS Office of Public Affairs invited two television producers to discuss how popular science-based film can help underscore that message.

In a session titled “Science Film: An Aperture into Science Advocacy,” Andre Bormanis, best known as the science consultant on the “Star Trek” series and Brandon Fibbs, a TV producer who most recently worked on the updated “Cosmos” series with Neil deGrasse Tyson, spoke to a standing-room-only crowd at the Grand Hyatt in San Antonio. Joint Quantum Institute Director of Communications Phil Schewe moderated the session discussion, and APS Vice President Laura Greene provided opening remarks.

The presenters’ key message: Storytelling can help scientists make the connection between breakthroughs in the lab and innovations that benefit the public.

Scientists, said Fibbs, can advocate for their research by using examples in popular films. He underscored his point by showing selected clips from “Jobs,” “The Story of Louis Pasteur” and “The Imitation Game.” He stated that the public assumes many innovations come from the private sector, but they are actually products of federally funded scientific research. He added that if research disappears, the innovations that depend on the research will similarly disappear. He concluded by telling the audience that the public tends to form its opinions about science from popular films.

Bormanis similarly provided examples from his own experience regarding how a well-crafted story can go a long way in making scientific research relevant to non-scientists. He urged the audience to find a connection – it can be humor or pragmatism, but it needs to be accessible to communicate science to non-scientists. He also used examples from the new “Cosmos” series to underscore his point, including the depiction of the story of astronomers William and Caroline Herschel and a personal story about how a German U-boat lens found its way into a telescope he purchased.