Get in the Science Education Game!

As a kid, I remember playing random games during recess. Generally, they weren’t all that great because I disagreed with the rules, when there were rules and it didn’t devolve into some early form of Calvin-Ball. Still, I played because the other option was to sit on the sideline. 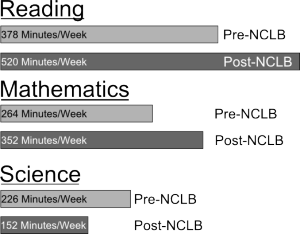 When it comes to teaching science in the public schools, there’s one similarity between the playground and the classroom: You either play along with the rules or you sit and watch the game go by.

Because science was left out of the No Child Left Behind (NCLB) rules set in 2001, American students have fallen behind their international peers in scientific literacy. Among the 16 countries that have tracked student performance in the “Trends in International Mathematics and Science Study”, American fourth-graders have fallen precipitously from second in the world in 1995 to tenth in 2007. A wider study of 15-year-old students between 2000 and 2006, the “Program for International Student Assessment,” which tracks performance among 38 nations, shows a similar collapse of American competitiveness. American students fell from 15th to 23rd in only six years.

NCLB demands that schools show yearly improvement in reading and mathematics, or face federal sanctions and penalties. How have schools reacted? By increasing the amount of time spent every single week on reading and mathematics. Reading instruction is up 38% to nearly nine hours a week. Math is up 33% to almost six hours. Science has no bearing on a school’s annual performance and is down 33%, to just two-and-a-half hours a week.

We may not like the rules, but if we’re not willing to play by them, we’ll just spend all of our time on the sideline. As Congress looks to reauthorize NCLB, science has to be written into the rules, so that we can get in the game.