At a briefing on Capitol Hill, the Cato Institute made a case against government support for science, but it actually showed why we need to speak out in favor of that funding.

On July 11, I attended a briefing on Capitol Hill titled "Why Six Presidents Opposed State-Sponsored Science — And Why You Should Too" sponsored by the Cato Institute, a libertarian think tank. The speaker, Cato scholar Dr. Terence Kealey, a clinical biochemist who used to be the Vice Chancellor of the University of Buckingham in the UK, has written books concerning the economics of government-funded science. Note: in this case, "state-sponsored" means "federally-sponsored."

I walked into the talk skeptically, curious as to what arguments would be posed. I took copious notes and left feeling even more strongly how important it is to be a voice advocating for physics and science, including for funding from the government — and why you should be one, too!

Setting aside the historical misrepresentations of the talk, the speaker presented a few claims as to why the government shouldn't fund science. (One example of a misrepresentation was saying that FDR was savagely against science funding. In reality, it was FDR who asked Vannevar Bush to think of how to extend into peacetime the benefits the U.S received from government-sponsored scientific research during wartime, leading to Bush's vision of the National Science Foundation.)

His main assertion concerned economics: only private funding for science has a positive economic benefit, and therefore the government should not participate in something that will not grow the economy. In fact, according to his argument, public funding for science is an effective drain on the economy, because it pulls scientists away from the private sector, diminishing the private sector's potential for productivity. Along these lines, he noted that between 1890 and 1940, the U.S. and Great Britain did not invest in science and became the richest countries, while France and Germany, who invested strongly in science in academia, had lower GDPs. This correlation, of course, ignores everything else that was going on at the time, such as the boom of mass production thanks to the moving assembly line. He cited statements from the Organisation for Economic Co-operation and Development (OECD) and one nameless economist at the U.S. Bureau of Labor Statistics. Perhaps his books have more data to back up these claims, but he did not present them during the talk.

Kealey's third main claim is that science is not a public good, especially since science done 100 years ago — specifically Einstein's theory of general relativity — is not easily understandable by everyone at an early age today, and science today is even more complex and more difficult for the average person to understand. Since it is not accessible to everyone, it should not be government sponsored. In fact, he believes that the reason government funding for science has plateaued is that officials have given up on the idea that science funding has an economic benefit, and the money for NSF is only to placate the scientific elite.

Why am I laying out his arguments in detail here, especially since they fly in the face of so much we talk about and value in the physics community? It's because there were people in that room in the Rayburn House Office Building on Capitol Hill, including Congressional staffers, who either agreed with some or all of his assertions or could be influenced by them. That is dangerous. His claims reflect a perspective that scientific research should be driven only by what the private sector values, or by those who have the means to be an individual entrepreneur or philanthropist. Industry of course plays an essential role in physics, but this view leaves out academia and the national labs. The decisions of what scientific investigations are done should not solely be based on what turns a profit — that's not how academia and the national labs work.

Some basic science research happens in companies, but what about all of the other fundamental investigations happening today? Following the talk, I emailed Dr. Kealey to ask him how the discoveries of the Higgs boson and gravitational waves would have come about if only the private sector funded science. His response was that philanthropies would have supplied the funding instead, stating in his email reply that "it cost CERN some $13.25 billion to discover [the Higgs], yet the Bill and Melinda Gates Foundation has an endowment of $44 billion (Harvard's is only $38 billion), so it could have afforded it three and a half times over. So why didn't it? Crowding out. If the government funds a program, then the private sector is deflected." Aside from the fact that philanthropies don't want to use up all of their endowments, I don't think it is a realistic assertion that a philanthropy would have stepped in. Just because it could, doesn't mean it would. Would it see this as a need to be filled? Would it also have funded all of the basic research that led up to the eventual construction of the large facilities? Would it just neglect all other science investigations while focusing on one or two high-cost projects? I don't think so. Philanthropies like the Gates Foundation aren't established to carry out one line of investigation, but rather to have a diverse portfolio in order to make the biggest impact they can, and the Gates Foundation does not address this type of science. The Kavli Foundation would be more relevant since it supports particle physics projects, but its endowment is much smaller, and its portfolio also includes astrophysics, nanoscience, and neuroscience.

Government funds are important for all kinds of basic physics research that advances our understanding of the world we live in, includes and educates an increasingly diverse group of scientists, and benefits everyone in society with technological advances that permeate everyday life in ways everyone can understand. Viewpoints like Kealey's are why we as a community of physicists and scientists must speak up for our needs and values — others are, and people are listening, including those in Congress. 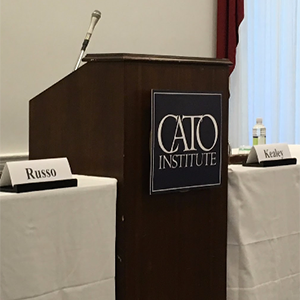