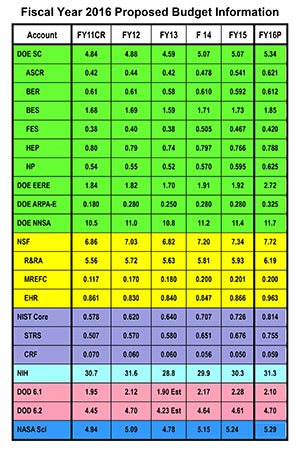 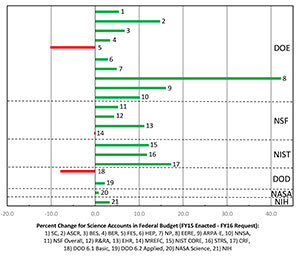 The added funds would provide additional resources for research and development and relieve some of the pent up stress in many programs. But the prime beneficiaries would be technology programs, the biomedical sciences and applied defense programs.

As the accompanying charts show, Energy Efficiency and Renewable Energy (EERE), ARPA-E and the National Nuclear Security Administration (NNSA) would be the big winners in the Department of Energy (DOE), while Fusion Energy Sciences (FES) would be the big loser. Other DOE Office of Science (SC) accounts would receive increases ranging from a high of 15 percent for Advanced Scientific Computing Research (ASCR) to a low of 3 percent for High Energy Physics (HEP) and Biological and Environmental Research (BER), with Basic Energy Sciences (BES) and Nuclear Physics (NP) receiving plus ups somewhere in the middle. Overall, the DOE request would provide physics with modest increases, relieving some of the immediate stress a number of the programs have been experiencing.

The physics picture at the National Science Foundation (NSF) is decidedly gloomier. As the charts illustrate, NSF would receive a reasonable increase, but Education and Human Resources (EHR) would be the prime beneficiary. Math and Physical Sciences would receive a scant 2.2 percent boost, with Physics receiving only 0.9 percent. The NSF numbers reflect the Administration’s ongoing emphasis on advanced manufacturing, clean energy and STEM education.

The National Institute of Standards and Technology (NIST) continues to get significant attention from the White House in the budget request, again demonstrating the Administration’s tilt toward technology and manufacturing. A similar tilt toward applied research is shown by the proposed Department of Defense (DOD) request, with the applied research programs (6.2) receiving an increase and the basic research programs (6.1) receiving a cut.

After three years of fairly flat funding, the National Institutes of Health (NIH) would receive a $1 billion increase. Although modest, the 3.3 percent increase would allow NIH to fund up to several thousand new proposals.

The Administration’s top line request for NASA is $18.5 billion, an increase of 2.7 percent. Although NASA Science would receive a boost to $5.29 billion, the 0.8 percent increase represents the smallest in the agency’s request. The James Webb Space Telescope would receive $620 million, keeping its construction profile intact. Among the science divisions, Earth Science would get the greatest attention, receiving an increase of 10 percent, in part reflecting the transfer of some NOAA activities to NASA. By contrast, Planetary Science would be trimmed by 5 percent. Astrophysics would land in the middle, receiving a hike of 3.7 percent.