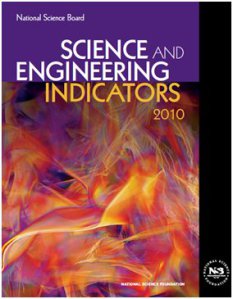 Joblessness across the entire economy doubled to nearly 10 percent last year, and astonishingly, unemployment for those in science and engineering fields more than tripled, according to the National Science Board’s recently released biannual report, Science and Engineering Indicators.

During a Jan. 15 press roll-out, headed up by Arden Bement Jr., Steven Beering, and Kei Koizumi, the mantra of the year was: It’s all about job creation!

I like to refer to report as the Book of a Thousand Blog Posts. It has a gold mine of interesting data, statistics, and information regarding the role of science and engineering in the United States, ranging from education, productivity, economics, public perception, and just about every other metric imaginable. 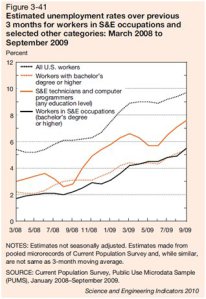 There’s a huge amount of interesting information hidden within the report. For example:

Take a look at the report and let me know if you find any particularly interesting results that I might have missed.