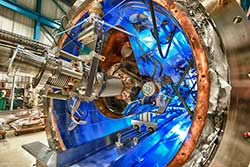 Ritz made the important point during a Senate briefing last week.

But building things costs money, and federal support for particle physics – also referred to as high-energy physics – has declined in real terms by more than 50 percent during the past 25 years.

While best-known for breakthrough discoveries, such as the Higgs boson, within its own research realm, particle physics contributes broadly across other disciplines and in developing advanced technologies. Biologists, chemists and material scientists rely heavily on synchrotron light sources to conduct their research. MRI machines have become standard tools for medical diagnosis and proton accelerators are used to treat cancer.

With the future of U.S. particle physics uncertain and the P5 report in hand, physics leaders spent the last few weeks on Capitol Hill educating congressional members and staff on the essential role particle physics plays in our science enterprise and sharing the community’s vision for its future.

The panel provided testimony and answered committee members’ questions, discussing the benefits of a healthy particle physics program to our country, the globalization of the field, the deliberative and inclusive process used in writing “Building for Discovery,” and a strategy to help America regain its primacy in particle physics in the era of constrained budgets.

Their testimonies reiterated a salient message from the P5 report: The U.S. must raise its game in construction of new facilities to remain a global leader in particle physics. “Without the capability to host a large project,” the report and Ritz’s testimony note, “the U.S. would lose its position as a global leader in this field, and the international relationships that have been so productive would be fundamentally altered.”

Given constrained budget requirements, the P5 panel made difficult choices and eliminated excellent research projects to increase resources for new facility construction and ready the nation for long-term success. But again, building new facilities requires resources, and the report’s lowest budget scenario (Scenario A) is precarious, approaching the point where hosting a world-class facility in the U.S. while maintaining the other components of a successful research program would not be possible.

During the hearing, Ranking Member Eric Swalwell (D-CA15) deemed Scenario A “unacceptable” in his opening remarks. American Physical Society President Malcolm Beasley provided an additional warning about Scenario A in the form of a letter, which was submitted for the record by Rep. Randy Hultgren (R-IL14).

And Chairman Cynthia Lummis’ (R-WY) opening statement indicated support for scientific research is still a bipartisan issue: “…we cannot overlook the fact that the federal government plays a critical role when it comes to the nation’s long-term competitiveness in the physical sciences… In particle physics, the U.S. is already slipping and stands to lose its position of global significance if we do not act boldly.”

“Building for Discovery” provides a vision for the future of U.S. particle physics and a roadmap for making it a reality. But there is also a saying at the Pentagon that “a vision without resources is a hallucination.” Let’s hope Congress heeds Chairman Lummis’ advice and acts boldly. Otherwise, U.S. particle physics may become an oasis.