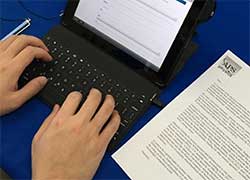 Science recently reported that NSF’s efforts to edit grant titles to make them easier to understand have been working. The purpose is to make the awards more transparent, so that non-experts have a better understanding of them.

Grant titles have come under fire from some members of Congress who say the scientists’ research is a waste of taxpayers’ dollars. The members of Congress include Rep. Lamar Smith (R-TX) who specifically picked dozens of NSF awards to be scrutinized by congressional staff in 2014 and Sen. Jeff Flake (R-AZ) who has continued former Sen. Tom Coburn’s initiative to flag select NSF grants as unnecessary and catalogue them in a “wastebook.”

You might ask: “Why don’t those members of Congress read the proposals or project summaries to see what the research is about?” It’s because they can’t.

The only pieces of public information about NSF awards are the titles and abstracts (short descriptions of awards’ scientific activities and broader impacts). If those aren’t written in such a way that the purpose and benefits of the research can be understood, then people might misconstrue them, and may even think they’re silly. As part of NSF’s efforts to increase transparency and accountability, new guidelines were developed as to how those abstracts should be written.

NSF owns the titles and abstracts—as stated in the agency’s rules and regulations –which can be changed by NSF program directors. While they have the authority and responsibility to do so, program directors are sometimes hesitant to make edits, at least without first asking the principal investigators (PIs) if a new version still represents their work. If you’re a PI, it’s important to work with the program directors if they contact you about making changes to your grant title or abstract. In fact, it’s written into the new guidelines that you “may be contacted by [your] NSF Program Officer for assistance in preparation of the public award abstract and its title.”

NSF’s review process to select awards for scientific research is the gold standard, ensuring that taxpayer funding supports quality research projects, but critics of the agency will use whatever ammunition they can find to raise doubts, including the abstracts and titles. No one wants more misunderstandings that can lead to soundbites like “shrimp on a treadmill.” In the meantime, NSF’s efforts are trying to help reduce misunderstandings, especially in this era of heightened scrutiny. It’s in everyone’s best interest to make plain the purpose and benefits of the research being done. Clear, concise communication is the key to getting non-experts to understand your research—and to helping prevent critics from using you as an example.