New DIII-D research shows how to maintain a hot plasma core with a cool exterior.

WASHINGTON -- One of the greatest challenges in fusion energy is to maintain an extremely hot and dense plasma core so that fusion can occur, while keeping that heat from melting the walls of its container. Temperatures in these fusion containment devices, known as tokamaks, can reach 10 times the temperature of the sun. This requires suspending the fusion plasmas within the doughnut-shaped tokamak vessel using extremely powerful magnetic fields, since no material on earth could withstand that type of heat. Sometimes, however, heat and energetic particles escape their magnetic cage and must be dissipated by a device known as a divertor, which circles the tokamak chamber at the top and bottom.

Balancing these temperature requirements—extremely hot in the core and cool enough not to damage the divertor and walls—is one of the central challenges of creating practical fusion energy. An international team of researchers at the DIII-D National Fusion Facility has developed an innovative solution to this challenge that uses active injection of highly radiative gases to cool the plasma in the edge region, reducing the heat before it reaches the divertor. Even better, they have done this while maintaining high plasma performance in the core region.

“In these experiments, we showed that efficient divertor cooling and a high-performance core can be compatible,” said General Atomics researcher Dr. Huiqian Wang, who led the study. “This is a very significant result for the fusion community, because it is the first time we have achieved a boundary solution that is promising for hot-core, steady-state fusion plasmas.”

DIII-D is the largest magnetic fusion research facility in the U.S. and is operated by General Atomics as a national user facility for the U.S. Department of Energy’s Office of Science.

The ability to fully cool the divertor while not reducing the performance of the plasma core has eluded researchers for decades. To illustrate the scale of the challenge, plasma cores in excess of 100 million degrees Celsius are necessary for fusion, but the solid walls of the tokamak can tolerate temperatures of only a few thousand degrees. Researchers have tried injecting radiative gases into the plasma and have achieved strong divertor cooling, which is referred to as a “detached” divertor by plasma physicists.

Unfortunately, that same cooling often works its way from the divertor to the plasma edge to negatively impact a region of high confinement, referred to as an edge transport barrier (ETB), thus reducing the fusion performance. A transport barrier is a region of low plasma turbulence that functions as an insulating layer that significantly slows the passage of particles or energy.

The DIII-D team has shown promising results with a new approach that uses an additional transport barrier, further inside from the edge of the plasma, to isolate the hot core from the cooler edge (Figure 1). This internal transport barrier (ITB) is created by tailoring the shape of the plasma current in a way that is known to reduce plasma turbulence. When the injected radiative gases dissipate divertor heat and cool the edge transport barrier, the internal transport barrier is actually enhanced, improving the thermal isolation of the high-temperature core. Therefore, high core plasma performance is maintained, as manifested by the high plasma pressure relative to the theoretical limit and the high energy confinement factor—about 50 percent higher than normally obtained in standard high-confinement (H-mode) plasma regimes.

This new physics approach will be critical for future fusion reactors, because they will feature higher-power plasmas operating for sustained periods of time, rather than the short pulses at DIII-D. Because a reactor can’t shut down its plasma every few seconds to cool the divertor, it must have a divertor that is cooled independently of the heat in the core.

“This work has benefited from support of a broad team of both core plasma and boundary experts,” said General Atomics senior researcher Andrea Garofalo. “It is amazing to see how the plasma self-organizes in a way that helps us address a major challenge for fusion energy. We are excited to continue to develop this approach towards future fusion reactors.” 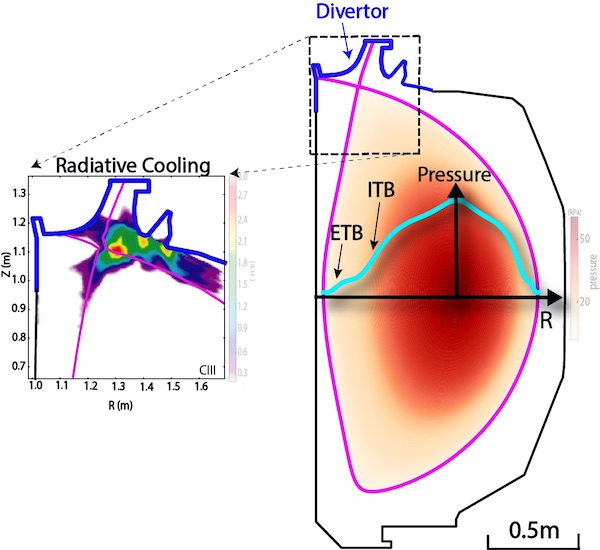