Fire and Ice: How to Keep Fusion from Melting Metal Devices

Disruption mitigation had a grim outlook for preventing surface melting in future fusion devices, but scientists are giving it a second look due to new and improved methods and analysis.

He is describing the difficulties of confining hot plasma fuel inside a fusion device called a tokamak. One of the challenges is controlling violent disruptions that can cause surface melting of the tokamak walls.

Researchers had hoped that melting might be avoided by injecting noble gases into the plasma—a superheated state of matter that makes up 99% of the visible universe. But previous experiments indicated that not enough radiation comes from the noble gas to prevent surface melting.

Now Dr. Sweeney and his team have improved previous approaches, leading researchers to reconsider the outlook for these mitigation techniques. Their new analysis provides hope that this method can radiate 90% of the thermal energy as light—instead of wall-melting heat—in current and future tokamaks. He will share their results at the virtual 62nd Annual Meeting of the APS Division of Plasma Physics.

Fusion powers the sun by forcing hydrogen atoms to combine into helium and releasing enormous amounts of energy. A tokamak uses strong magnetic fields to confine a plasma that is heated above 200 million ℃, maximizing the efficiency of hydrogen isotope fusion. Tokamak experiments ITER and SPARC are poised to demonstrate net fusion energy.

Yet despite state-of-the-art plasma control algorithms, operating a tokamak power plant for decades without a single disruption is unlikely. Therefore, the machine must withstand disruption heat fluxes and electromagnetic forces. For economic viability, researchers want to avoid breaking or melting components, and a well-tuned disruption mitigation system can help to reduce these expensive problems.

In 2019, a shattered pellet injector (SPI) was installed on the largest operating tokamak in the world, the Joint European Torus (JET) in the U.K., to help develop the ITER system. The SPI is a pipe gun that launches a cryogenically frozen pellet of noble gases and hydrogen as fast as a speeding bullet, then shatters the pellet just before it reaches plasma to ensure it is absorbed.

“In ITER, the shattered pellet fragments will enter the plasma and create a light as bright as a 100 gigawatt light bulb—equivalent to 10 billion LED lights—radiating the energy over the walls instead of concentrating it in one place,” said Dr. Sweeney. “The goal in ITER is to radiate 90% or more of the thermal energy to prevent surface melting.”

Researchers fired pellets into more than 70 plasmas to study how well the heat is converted into light. Although previous analyses found that only about 50% of the heat is radiated as light, their measurements suggest there may have been error in assessing the radiation source.

“The previous analysis assumed the plasma ‘light bulb’ to be a uniform torus-shaped source,” Dr. Sweeney observed, “but these new measurements support the interpretation of a helical radiation source more like a French cruller than a doughnut. I’ve always been a doughnut man, but sometimes a doughnut just won’t cut it and you really need a French cruller instead.” In the case of preventing tokamak fusion devices from melting, it seems to be true. 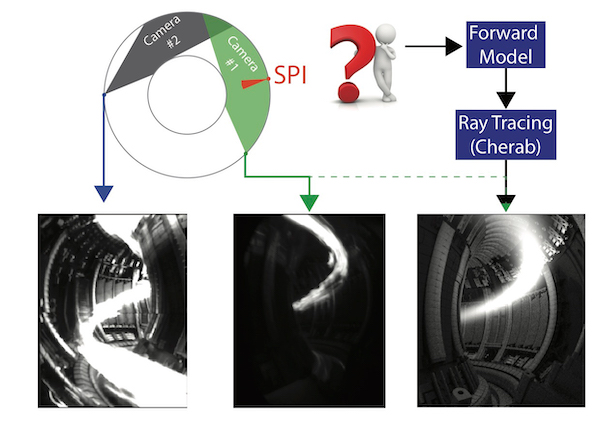 The left two images are synchronized camera images from a deuterium SPI on the JET tokamak. The right image is a forward model (i.e. researchers’ best guess using computer modelling including the Cherab Spectroscopy Modelling Framework) of the helical light source, as viewed by a synthetic fast camera that uses light ray-tracing to recreate the real camera image in the center.