Radiation Therapy for Fusion Plasmas and a Major Puzzle Solved

New findings advance the use of radio waves to stabilize plasmas and track RF trajectories.

VIRTUAL MEETING (CST) -- Radio frequency (RF) waves, similar to those used in microwave ovens, can provide a kind of radiation therapy for developing and controlling on Earth the fusion energy that powers the sun and stars. Such waves help raise the temperature of the plasma to fusion-relevant conditions many times hotter than the core of the sun. They also drive current in the plasma to create a magnetic field that joins with the magnetic field of a device called a tokamak—confining the plasma and enabling fusion reactions to take place.

Recent discoveries at the U.S. Department of Energy’s Princeton Plasma Physics Laboratory (PPPL) and the MIT Plasma Science and Fusion Center (MIT PSFC) now advance the use of these essential waves. Researchers will present their results at the virtual 62nd Annual Meeting of the APS Division of Plasma Physics.

The findings help answer some of the biggest open questions for scientists seeking to develop a fusion reactor as a power source to generate electricity: How do you heat the plasma to sufficient temperature? And how do you confine and stabilize this plasma once it’s created?

At PPPL, researchers Prof. Allan Reiman and Prof. Nat Fisch teamed up to predict the RF condensation effect, which suggests that above a power threshold, the RF-driven current becomes concentrated exactly where it stabilizes best: in the center of a magnetic bubble or island. When left unchecked, these islands can cause a disruption in the plasma. But when the key threshold of power is exceeded, the current condenses spectacularly, thereby preventing islands from growing large enough to create disruptions.

At the MIT PSFC, researchers led by doctoral candidate Bodhi Biswas have solved a major puzzle in experimental observations of theoretical simulations that predict how RF waves travel through the plasma. The “missing physics” suggested by the MIT PSFC team lies in the chaotic outside layer of the plasma. This layer may broadly scatter RF waves traveling through the region.

“With the added physics of turbulence interactions, our confidence in existing RF codes is greatly improved,” Biswas said. “The scattering of waves by turbulence may, in many cases, be essential to matching the experiment, and to applying RF power effectively in future tokamaks.” (See Figures 1 and 2.)

Prof. Fisch, Director of the Program in Plasma Physics at Princeton University, noted the existence of “an important synergy between the MIT and Princeton discoveries.” This synergy, he said, indicates that the scattering of RF rays by turbulence can be counteracted by the discovery made by Prof. Reiman and his students of the current condensation arising in the center of an island.

RF radiation therapy thus “may be an excellent candidate for stabilizing magnetic islands once conditions for the condensation effect set in,” Prof. Fisch said, “even as turbulent fluctuations at the plasma edge tend to spread RF trajectories as seen and accurately modeled in present-day experiments.” 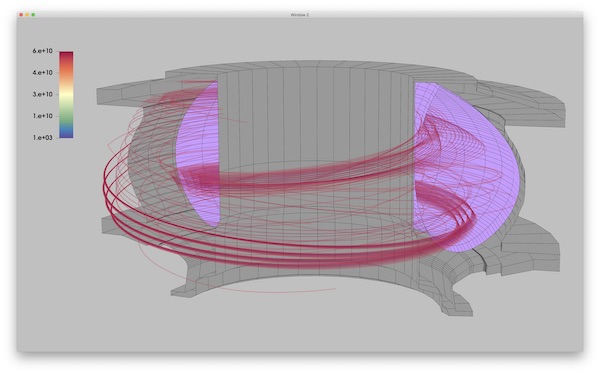 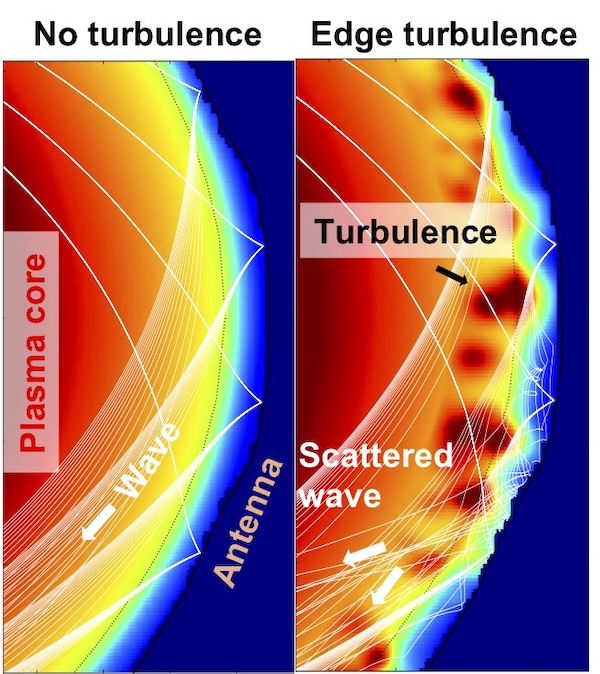 Figure 2. Left: RF waves (white lines) are launched from the antenna (orange dashed line) into the plasma. Without any turbulence, the wave takes a smooth, unscattered path to the plasma core. Right: With the addition of a turbulent edge region, the wave is significantly scattered before it reaches the core. Credit: Bodhi Biswas, MIT PSFC.