Advances in room temperature plasmas provide a pathway for alternative approaches to killing or inactivating bacteria and viruses.

VIRTUAL MEETING (CST) -- The continual battle against the viruses and bacteria that can spoil our food or drive global pandemics may have a new soldier: cold, atmospheric pressure plasmas.

Often called the fourth state of matter, plasma is an energetic gas of charged particles found throughout nature in the form of lightning and the aurora. It serves a major role in producing materials for the manufacturing of modern electronics, such as smart phones and computers. The charged nature of the plasma makes it useful for industrial processes, as it can be controlled with electric or magnetic fields and can generate a highly reactive environment for specialized room temperature chemistry.

Such industrial scenarios typically require the thin atmosphere of a vacuum chamber to work properly. However, recent advances have led to a class of plasma that can be produced at everyday temperatures and pressures, allowing this highly reactive chemical environment to interact with water and living matter.

Researchers at the University of Minnesota analyzed this cold, atmospheric pressure plasma and its interactions with biological systems. They have identified key plasma-produced reactions that can help inactivate a virus.

Prof. Peter Bruggeman and his colleagues showed that virus inactivation can be enhanced by the presence of singlet oxygen (an electrically excited state of oxygen that is highly oxidizing), which can be readily produced in a plasma environment. Related experiments by the group examined how these plasmas interact with liquids, which can further enhance the ability to effectively treat a virus.

Prof. Bruggeman, who will detail his team’s findings at the virtual 62nd Annual Meeting of the APS Division of Plasma Physics, also explored the use of plasma for surface decontamination. Other methods of decontamination—such as applying energetic ultraviolet (UV) light on a surface to kill viruses—have the disadvantage of being blocked by surface features. Like moss growing on the shady side of a tree away from direct sunlight, pockets of viruses or bacteria can hide in these shadows from the otherwise destructive UV rays.

Plasma decontamination, on the other hand, behaves more like a flood, exposing both the illuminated and shaded parts of a surface with virus-damaging substances. Recent proof-of-principle experiments showed plasma can fully inactivate aerosolized viruses on timescales of about 1/100th of a second—relevant for decontamination in ventilation and air conditioning systems.

Such virus decontamination is not only crucial to the future fight against pandemic-level viruses like COVID-19. Plasma technology is also being sought in the fight against a more persistent opponent—methicillin-resistant Staphylococcus aureus (MRSA) or antibiotic-resistant bacteria.

Prof. Bruggeman and a multidisciplinary team of experts in plasma science, biology, and 3D printing from the University of Minnesota and the University of Michigan recently received a Growing Convergence Research Grant from the National Science Foundation to study the effect of plasma on biofilms—the environments in which bacteria can form communities notoriously resistant to conventional antibiotic therapies (Figure 1).

According to the Centers for Disease Control and Prevention, every 15 minutes one person in the United States dies because of an infection that antibiotics cannot treat effectively. Plasma research could change those outcomes significantly and become a new, effective tool in the fight against germs.

This work was partially supported by U.S. Department of Energy, Office of Science, Office of Fusion Energy Sciences, General Plasma Science program, under Award Number DE-SC-0016053 and DE-SC-0020232, the National Science Foundation under Award Number PHYS 1903151 and NSF OIA 2020695, the U.S. Department of Agriculture, National Institute of Food and Agriculture under Award number 2017-67017-26172 and the University of Minnesota. 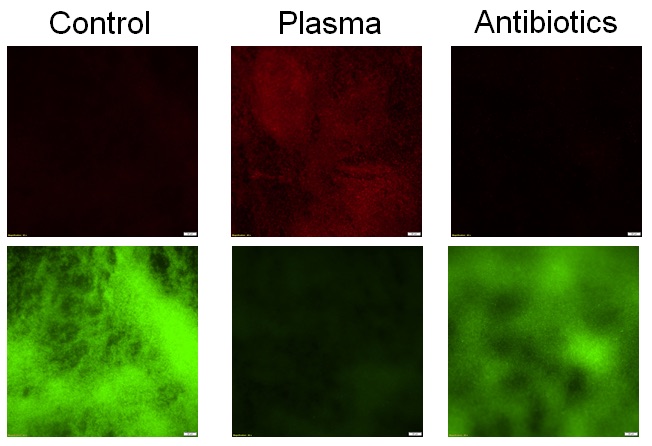