WASHINGTON—Realizing fusion’s potential to provide a clean, nearly limitless source of electricity requires the highly effective confinement of extremely hot, ionized hydrogen atoms. In this super-heated plasma of ions and electrons, the hydrogen nuclei can fuse into heavier helium atoms, releasing large amounts of energy. But plasma scientists have long been puzzled by a mysterious contradiction between theoretical predictions and experimental observations of how fusion energy confinement varies with the mass of hydrogen isotopes used to fuel the plasma. A new analysis by scientists at General Atomics (GA) has helped unravel this mystery by revealing an improved theoretical model that includes the tiny, but important, mass of the electron.

GA, based in San Diego, CA, hosts one of the world’s largest fusion theory and computation groups. The team of physicists develops complex mathematical models and computational tools to advance fundamental understanding of plasmas and predictive capability needed for a sustainable fusion energy source, in support of the U.S. Department of Energy’s Office of Science. Most of the group’s research focuses on the tokamak concept, a device that uses powerful electromagnets to produce a doughnut-shaped magnetic field for confining a fusion plasma while it is heated to more than 100 million degrees Celsius, conditions in which fusion can occur. GA hosts the largest magnetic fusion research facility in the U.S., known as the DIII-D National Fusion Facility.

The fuel for a tokamak fusion reactor can be made up of different isotopes of hydrogen. As illustrated in Figure 1, each isotope is made up of only one proton, but they differ in the number of neutrons the atom contains. The extra neutrons make the isotopes heavier: Deuterium (D) is twice as heavy as ordinary hydrogen (H, sometimes called protium), while tritium (T) is three times as heavy. Future fusion reactors will use a mixed fuel composition consisting of 50 percent D and 50 percent T. This mixture allows the highest fusion power at the lowest temperature. However, most magnetic fusion experiments today use pure deuterium as the main isotope species since it is readily available and easier to handle than tritium. Because DT fusion experiments have been conducted only a few times over the past few decades (the last time was in 1997 at the JET experiment at the Culham Centre for Fusion Energy in Oxfordshire, U.K.), theoretical modeling of the behavior of H and DT fuel, rather than just D fuel, is needed to help plan for the ramp-up stages in a reactor from D to DT.

“Past experiments comparing deuterium and hydrogen plasmas have generally found an increase in energy confinement time with increasing hydrogen isotope mass,” said GA physicist Emily Belli. “However, while we know that deuterium is better confined than hydrogen, this observation contradicts simple theoretical models that predict the opposite of experimental results.”

This contradiction between theory and experiment is a long-standing mystery known as the “isotope effect.”

Using numerical simulations on DOE’s Summit supercomputer at Oak Ridge National Laboratory—the most powerful computer in the U.S.—a new theoretical framework was developed to describe the subtle role of electrons in the behavior of the plasma turbulence that drives heat loss and degrades confinement in tokamaks.

Because electrons are more than 1,800 times lighter than hydrogen ions, simple scaling models assume that electrons play no role in the energy confinement. The new theory describes how the small-but-finite electron mass strongly affects the ion behavior and can oppose the simple scaling formula. The influence of electrons becomes stronger for lighter isotopes like hydrogen and is reduced by the added mass of the heavier ions.

In the plasma edge region of a fusion device, these electron-mass corrections can become dominant and reverse the scaling of simple theoretical models with isotope mass toward agreement with the experimental results, such that confinement improves for heavier hydrogen isotopes. In the end, this is favorable for increasing the efficiency of future fusion reactors as they move from D to DT fuel. 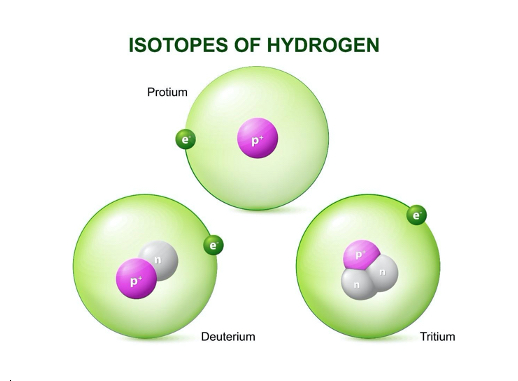