Parker Solar Probe: A Window Into Our Sun

VIRTUAL MEETING (CST) -- Launched in 2018, NASA’s Parker Solar Probe is on a mission to unravel the mysteries of our closest star. Equipped with four instrument suites that work in concert to study plasma physics, the spacecraft is designed to provide crucial information about the sun and its potential threats to humans on Earth and in space.

Space weather, for example, ranges from billions of tons of material hurled at Earth as coronal mass ejections (CMEs) to solar flares, which accelerate energetic particles that could damage electrical power grids on Earth and harm astronauts with radiation.

“As humanity becomes spacefaring, going to Mars and the moon regularly, we really need to understand space weather to protect our human assets as well as our robotic assets,” said Dr. Kelly Korreck of the Smithsonian Astrophysical Observatory. “We’re getting the inside scoop as to the origin of what hits us at Earth, in some ways looking back in time.”

Among the key mysteries Parker Solar Probe was designed to solve is why the solar corona is so hot—one million degrees hot. The main engine of the sun is the fusion at its core. As one moves away from the solar heat source, one would expect temperatures to decrease. But the sun’s outermost atmosphere layer (corona) is hotter than the inner chromosphere, which measures a mere 7,232 to 18,032℉. Scientists have puzzled for many years over the source of this heating, and Parker Solar Probe will directly measure the atmosphere to further our understanding.

The mission also aims to investigate energetic particles, sometimes known as cosmic rays, and the solar wind—the constant stream of particles that blasts off the sun at around one million miles per hour. Researchers want to know just what accelerates these particles into space.

Early results have already changed the way we understand our sun. One surprise is that magnetic switchbacks make up the large-scale structure of the inner heliosphere. Switchbacks are sudden changes in the magnetic field of the solar wind.

“At Earth, we don’t see these. They are washed out by the time they get here. But looking at the data close by, it’s like we planned for a straight road or maybe a gentle curve, and instead we have mountain switchbacks,” said Dr. Korreck.

The spacecraft has also made in situ measurements of stealth or streamer blow out coronal mass ejections (SBO-CMEs), unexpected explosions which can create space weather in the region around the sun—including at Earth. Learning to recognize and characterize these early CMEs will help scientists understand their evolution.

Parker Solar Probe also collects data at much smaller scales than solar explosions. For example, studying electrons and their heat flux tells us about how heat is transferred in the heliosphere. These new observations suggest that plasma instabilities limit the electron heat flux to a fraction of its maximum, with broad implications for heat conduction.

“The smaller-scale data is really important because a lot of these things can’t be reached in a laboratory at Earth,” Dr. Korreck said. “We’re able to learn about our star and then apply that to other stars and other astrophysical objects as well.”

In addition to studies of the sun and solar wind, Parker Solar Probe has been able to study plasma processes at Venus, explore the evolution of dust particles near the sun, and even capture rare images of “sungrazing” comets.

“It is the culmination of decades and decades of work by thousands and thousands of people,” said Dr. Korreck.

This work was supported by the National Aeronautics and Space Administration (NNN06AA01C). 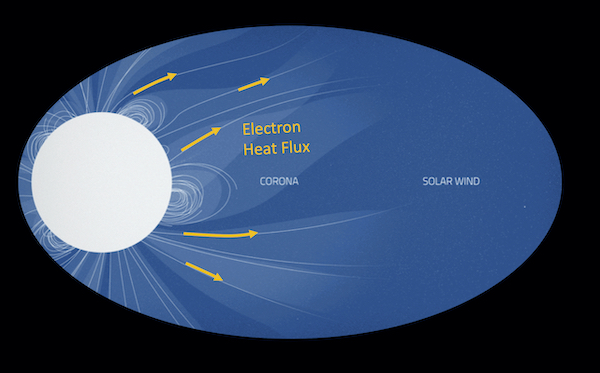 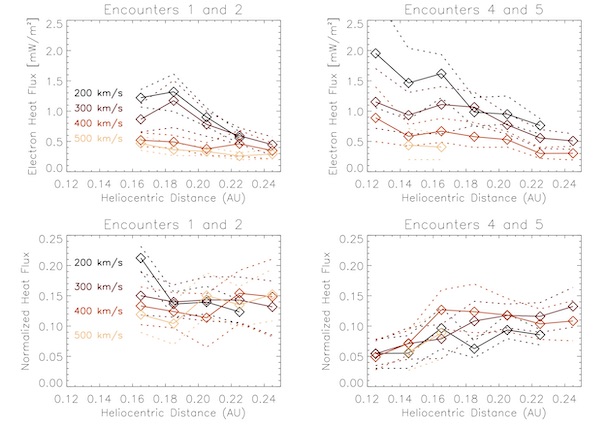 Electron heat flux near the sun. Electrons efficiently conduct heat from the solar corona. The Parker Solar Probe has made the first measurements of the electron heat flux in the near-Sun environment. These new observations suggest that plasma instabilities limit the heat flux to a fraction of its maximum or “saturation” level, with broad implications for heat conduction from our star and other astrophysical objects. Credit (above): J.S. Halekas et al., A&A, 2020. Credit (below): J.S. Halekas, adapted from NASA's Goddard Space Flight Center/Lisa Poje.