From the moon to the math, latest attempts at breaking CKM matrix unitarity—and discovering new physics

One of the best chances for proving beyond-the-standard-model physics relies on something called the Cabibbo-Kobayashi-Maskawa (CKM) matrix. The standard model insists that the CKM matrix, which describes the mixing of quarks, should be unitary. But growing evidence suggests that during certain forms of radioactive decay, the unitarity of the CKM matrix might break. 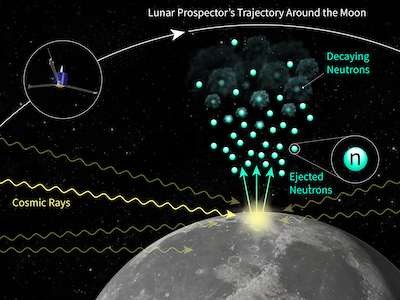 At the 2021 Fall Meeting of the APS Division of Nuclear Physics, researchers discuss how a NASA lunar mission and major theoretical progress could help snap the standard model.

The free neutron lifetime plays an important role in testing CKM matrix unitarity. However, two prevailing methods for measuring it conflict severely. So Jack Wilson and a team at The Johns Hopkins Applied Physics Laboratory and Durham University decided to think outside the box—by going to outer space.

Piggybacking on data from NASA’s Lunar Prospector Mission, which sent a spacecraft to orbit the moon, the scientists made the second-ever free neutron lifetime measurement from space. They reduced uncertainty by an order of magnitude.

“Our result opens up a third way of measuring the neutron lifetime. Using this technique in a dedicated mission could bring to an end a decades-long puzzle in fundamental physics,” said Wilson, who will share the results at the meeting on October 13.

A publication is forthcoming the same day from Physical Review C.

Ultimately, breaking the CKM matrix unitarity—and finding physics beyond the standard model—would demand a stronger discrepancy between theory and experiment. The most recent review of the field measured the disagreement at about three sigma. 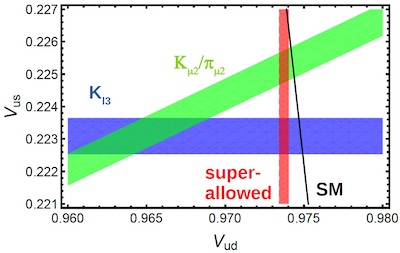 The values of the CKM matrix elements Vud and Vus obtained from different beta decay experiments, versus the unitarity requirement from the standard model. Credit: Chien Yeah Seng

“The current significant level of the observed anomalies is not yet sufficient to declare a discovery. The major limiting factor is the precision level of the standard model theory inputs,” said Chien Yeah Seng, a postdoctoral researcher at the University of Bonn.

At the meeting, Seng will share the story behind the theoretical research that revealed this hint of new physics and will discuss progress in making the theory side more accurate.

His collaborator Luchang Jin, a professor at the University of Connecticut and one of the theoretical pioneers behind the recent muon g–2 calculations, presents recent research refining a key theoretical component. The study dramatically reduces uncertainties in the low energy constants used for theoretical calculations.

Seng will lay out the path to finding a five-sigma discrepancy, including Jin’s work on radiative corrections, isospin-breaking corrections, and nuclear structure corrections. He predicts we could see a breakthrough even in the next few years.