Brains Built in the Lab, Octopus Robots, and Knitted Elephants

Welcome to the future of nature, recreated

The metaverse sells an alluring idea: With a simple virtual overlay, transform your fantasy into reality. But what if that new reality weren’t virtual?

Scientists presenting at the 2022 APS March Meeting have made significant advances toward recreating physical brains and bodies in the laboratory. Neurons made from skyrmions can now diagnose breast cancer. New artificial octopus arms may help explore the oceans, and elephant skin heal injuries. And water could one day compute like a brain.

“A remarkable and sought-after ability of the brain is its adaptive intelligence: where the brain regulates its functions ‘on the fly’ to respond to complex and ever-changing environments, contexts, goals and rewards,” said Priyamvada Jadaun, a research associate at the University of Texas at Austin (UT).

Jadaun and collaborators including Jean Anne Incorvia’s team from UT turned a lattice of skyrmions—swirling magnetic fields as tiny as a nanoparticle—into adaptable neurons that use machine learning.

In simulations, the neurons detect breast cancer better than standard AI used on patients today. Bonus: The devices also need less data, work in smaller networks, and use less energy. Skyrmion neurons mimic the adaptability of biological neurons and could pave the way for achieving the holy grail of AI: humanlike artificial intelligence.

“Ours is the first hardware-based neuron to understand and respond to underlying context, which allows the neuron to make complex, high-level decisions while considering multiple factors and make predictions from small datasets,” said Jadaun.

Meanwhile, a group from Ecole Normale Superieure (ENS) takes a different approach to building a brain: Can we use the basic ingredients of our own neurons and synapses to create tiny artificial computers?

“Modern computers may challenge humans at performing certain tasks, but they are orders of magnitude less energy-efficient than our brain, which functions with the power of a lightbulb,” said ENS PhD candidate Paul Robin. “This has sparked interest for bioinspired computing systems that would use water and ions (and not electrons), like biological neurons do—with little success so far.”

Robin’s team is changing that. Last year, they published a study predicting that ions can cluster up into simple neurons that hold long-term memories. Existing nanofluidic technology, they say, could feasibly create a tiny brain.

The researchers have begun experiments to test some of their theories, including whether nanofluidic neurons learn the way biological neurons do.

Many animals have neurons, but only one has a flexible appendage with versatile wrinkled skin and the power to help repair human tissues.

“Elephant trunks have been seen bulldozing trees, throwing lions several meters into the air, and picking up a tortilla chip without breaking it,” said Georgia Institute of Technology PhD student Andrew Schulz. “The trunk skin can have thicker armor than an armadillo, but still can stretch to be nearly 1.2 times its original length without tearing.”

Schulz and colleagues looked at elephant skin under the microscope, then used the collagen patterns to knit a pseudo-skin out of yarn. Turns out an elephant’s secret weapon is entanglement: When you try to pull out one fiber, many come with it.

“This research will help us create stronger tissues and even craft programmable skin graphs to help hospital patients or scar victims, as well as create protective armor that has the strength of Kevlar and the flexibility of silicon,” said Schulz.

Like elephant trunks, octopus arms also contort with surprising skill—lending hope for soft robots that could explore remote, confined places, from collapsed buildings to the inside of the human body.

Cecilia Laschi, a professor of robotics at National University Singapore, studies how octopuses and other ocean dwellers like crabs walk smoothly over uneven terrain and interact with a watery world.

“When grasping an object, our fingers can adapt to its shape, and our soft fingertips increase friction to hold the object stably. The physical interaction of the soft body with the environment is then an important part of the story,” Laschi said.

Laschi and her collaborators build soft robot prototypes, including one inspired by octopuses that can survey the seafloor while leaving little environmental trace. Her latest work looks at modeling embodied intelligence—when a robot’s behavior stems from interactions with its environment, not from a central brain.

Someday soon, we may find it no more surprising to consider an octopus’s arm intelligent as we do magnetic whirlwinds, programmable skin, or a wet pool of ions far from a human brain. 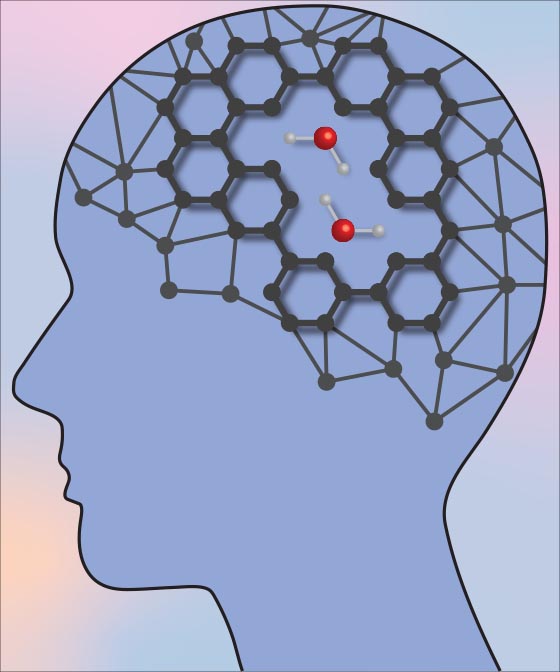 An abstract illustration representing the project of implementing learning algorithms with water- and carbon-based systems. 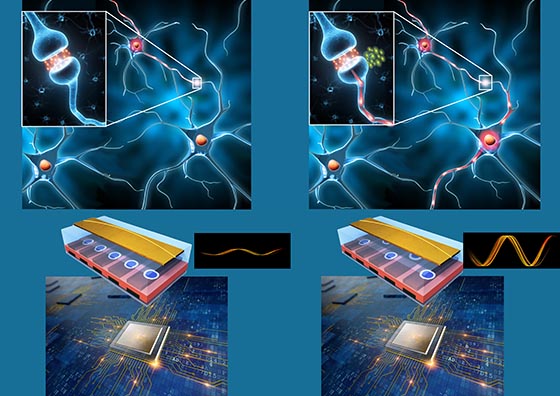 CREDIT: University of Texas at Austin

Depiction of adaptive intelligence in a biological neuron (top) and an artificial neuron (bottom). A change in the external environment, situation or context, changes the internal structure of the artificial neuron by repositioning its constituent skyrmions (blue circles) from a straight line (left) to a staggered arrangement (right). This restructuring in turn alters the functioning of the neuron, changing its response from a negligible output wave (left) to a large output wave (right). In the brain, this adaptive control of the neuron’s functioning (top) is carried out via neuromodulators (green circles). 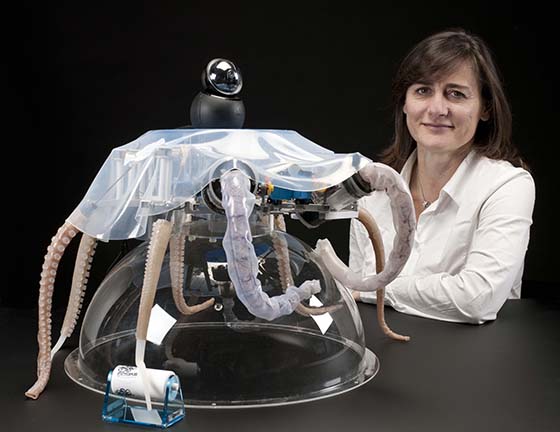 One of Prof. Cecilia Laschi’s passions is studying how the octopus can help inspire more advanced and capable soft robots. 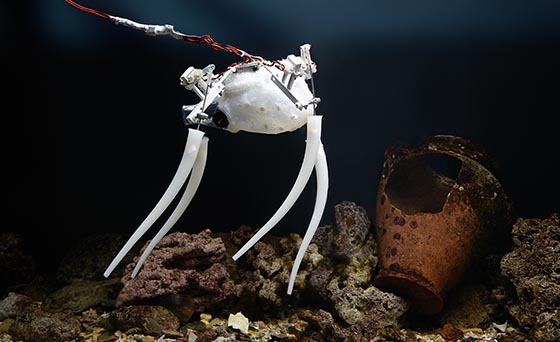