The Future of Particle Accelerators Is Here

Behind the scenes of the Electron-Ion Collider, green accelerators that waste no energy, and chiral magnetic effect results debuting this summer

The Electron-Ion Collider (EIC) will probe the internal structure of nuclear matter as it exists today. Electrons colliding with ions will exchange virtual photons with the nuclear particles to help scientists “see” inside the nuclear particles. The collisions will produce precision 3D snapshots of the internal arrangement of quarks and gluons within ordinary nuclear matter, like a combination CT / MRI scanner for atoms. Electrons can “pick out” individual quarks from the protons that make up nuclei. Studying how those quarks recombine to form composite particles will inform our understanding of how today’s visible matter evolved from the QGP studied at the Relativistic Heavy Ion Collider (RHIC). Credit: Brookhaven National Laboratory

When the Electron Ion Collider received the go-ahead in January 2020, it became the only new major accelerator in the works anywhere in the world.

“All the stars aligned,” said Elke-Caroline Aschenauer, Brookhaven National Laboratory Staff Scientist and a leader in developing the EIC plans. “We have the technology to build this unique particle accelerator and detector to do the measurements that, together with the underlying theory, can for the first time provide answers to longstanding fundamental questions in nuclear physics.”

At a press conference during the 2021 APS April Meeting, researchers will discuss how cutting-edge accelerators could collide with both energy consumption and our assumptions about the nature of matter.

“The scientific advances of the EIC will help us all to understand where we come from and how the visible matter around us is composed from its elementary building blocks,” said Aschenauer.

The accelerator and detector will serve as a kind of camera, taking 3D images and movies of electrons colliding with polarized protons and ions. Like a CT scanner for atoms, the EIC will let scientists see how force-carrying gluon particles hold together quarks, the internal components of protons and neutrons. It will also offer insights into the spin of fundamental particles.

Aschenauer will give status updates from the first year of the EIC project—a collaboration between BNL and Thomas Jefferson National Accelerator Facility—and an overview of its experimental equipment. 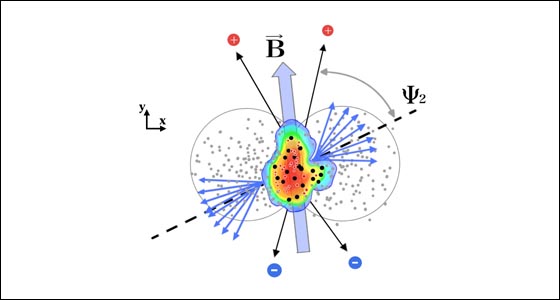 Experimental measurements of the Chiral Magnetic Effect (CME). An illustration of the hadron angular correlation pattern in the (x-y) plane transverse to the beam axis z in a heavy-ion collision. The CME induces an asymmetry in the emission of positive and negative hadrons along the axis of magnetic field. Credit: Dmitri E. Kharzeev and Jinfeng Liao / Nature Reviews Physics

Hunting for the chiral magnetic effect

The EIC will build on the Relativistic Heavy Ion Collider, which will soon produce major results of its own.

In summer 2021, data analysis will likely conclude on an experiment searching for decisive proof of the chiral magnetic effect. This proposed effect helps explain many fundamental features of the Standard Model and could unlock why our universe contains overwhelmingly more matter than antimatter, crucial to human existence.

Jinfeng Liao, a theoretical nuclear physicist at Indiana University Bloomington, will share key predictions about what the experiment might uncover.

“The signatures, as predicted by our theoretical study, show clear promise of unambiguously establishing the existence of chiral magnetic effect in the isobar collision experiment,” said Liao.

Liao and colleagues created a custom fluid-dynamics-based computational tool to simulate experimental collisions and any changes the chiral magnetic effect would cause.

They show that the new experiment has a better chance of detecting the effect than previous attempts, long plagued by weak signals and strong background contamination. The predictions were published in Physical Review Letters.

He will share results from the Cornell-BNL Test Accelerator, or CBETA, the world’s first to accelerate a beam multiple times while powering itself by reusing beam energy. It further reduces electricity demands with superconducting and magnetic equipment.

“People may benefit from the industrial applications of Energy Recovery Linacs by using better computer chips, by being cured in radiation therapy centers that guide beams with permanent magnets, or by inhaling accelerator-produced medical isotopes,” said Hoffstaetter.

Building on the success of the test accelerator, its principal investigator and Brookhaven Senior Physicist Dejan Trbojevic will present designs for a new green energy collider. Particles speed along racetrack beam lines, formed from high-quality permanent magnets which require no use of electrical power.

“The 'green accelerator' shows a completely new way of accelerating particles with very tight control of their motion and with an extremely high energy range. It has never been done before,” said Trbojevic.

He will demonstrate how the EIC, as well as a similar accelerator under consideration at the Large Hadron Collider, could incorporate the energy-saving features. 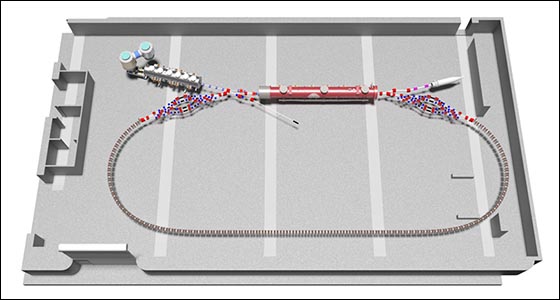