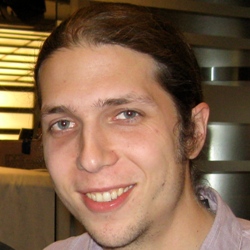 Describing Things with a New Language
Sam’s initial interest in physics was the result of having great math and science teachers who sparked his interest in describing the natural world with physics and mathematics. He’s “still amazed that you can describe things in the world using math.”

The Labor of Physics
Besides being able to explain things with science and math, Sam also liked to build things and get into the hands-on aspect of physics.

While studying at the University of Colorado in Boulder, Sam tried to sell a product he made on his own: he designed and built a battery-powered amplifier that preserved sound quality even when two people were listening to the same music player using headphones. He estimates that he “sold about ten of those on eBay.”

Physics Provides Key Background Knowledge
Sam Wurzel says that physics gave him the foundation to start his co-owned company, Octopart, which is a search engine that allows people to easily find electronic parts that they need. He found that having worked in an experimental physics lab gave him the skills needed to go into a career area that he didn’t know much about.

Mainly, Sam credits physics with giving him the basic knowledge needed to learn more and understand more of what his future company would need to succeed.

The Physics Behind His Company
Sam may have left the PhD program at the University of Colorado in Boulder, but that doesn’t mean that he doesn’t use physics to strengthen his company. The beginnings of Octopart are rooted in physics.

Sam’s graduate student friend had difficulties finding a certain part for an experiment in the various catalogs that he was searching through and he expressed his frustration to Sam. At that moment, Sam and his friend came up with the idea to create a site that was a one-stop shop for electronic parts.

By creating a website that combined all the catalogs and websites into one convenient site, Sam and his friend made it much easier for others to find the electronic parts that they needed quickly and efficiently.

To manage Octopart, Sam needed the physics knowledge to maintain his databases and relationships with distributors. Sam’s day-to-day work consists of meeting with electronics distributors and manufacturers, maintaining the systems that support the updated database of Octopart, and staying in touch with Octopart’s customers.

Dedication to Your Work
Sam stays in touch with cutting-edge research in physics, but he also feels that “working on a startup company is a little like grad school—it takes over your life.” He shows that “starting a company is similar to doing physics research” in that “both have the potential for huge impacts on people’s lives, both require problem solving and creative thinking, and both are filled with hidden traps and blind alleys.” Sam’s work integrates physics with business to provide a new kind of catalog for other people to use and make their lives easier.

The beginnings of Octopart involved late night coding for the website after having been in lab and class all day. Sam shows that dedication to an idea and background knowledge brings an idea to life.

You Can Always Learn
While building his company, Sam admits that he had to learn a lot of new skills to run his company. The advanced programming and coding for their website was done by Sam and his co-founders personally. Even though they weren’t sure how to approach creating the website itself, Sam and his co-founders were determined to start from the basics and perfect their skills so that they could launch their now successful website.