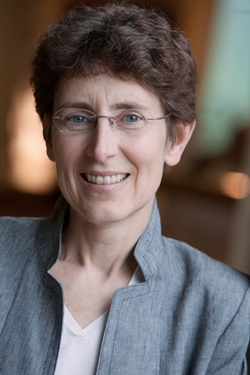 A Love of Learning
Growing up, both Alice’s parents were physicists. “That was pretty unusual at the time, especially for my mother” Alice says. Her parents instilled an early love for learning in Alice and her siblings, getting them interested in nature and reading. Alice especially loved math.

The Right Conditions
Alice got into science in high school and went on to study chemistry at Middlebury College, a small liberal arts school in Vermont.  Alice loved Middlebury’s close-knit and supportive science department.

In the summers, Alice interned at Bell Labs, studying liquid crystals and helium. That internship solidified her desire to become a research scientist.

Rising to the Challenge
Alice won a fellowship from Bell Labs to attend graduate school at Harvard.  She describes the transition from Middlebury to Harvard however, as “like hitting a brick wall at 50mph.” Unlike the supportive environment of Middlebury, Alice found she was one of only 3 women in the graduate physics department, a discrepancy she felt very clearly.

“One of my [male] classmates told me he was sorry [increased women’s rights] forced me to go to graduate school instead of staying home, where he was sure I would be happier!” she says.

Thankfully, Alice’s fellowship supplied her with a mentor, Physics Nobel Prize winner Doug Osheroff. “When I got discouraged, I visited my mentor at Bell Laboratories, Doug Osheroff. He encouraged me to keep going and shared his love of physics with me,” Alice says. With support from Doug and hard work, Alice completed her thesis in low-temperature physics and graduated with a PhD in physics.

Physics Breakthroughs for Technology
Alice returned to Bell Labs, studying how to add other materials to silicon wafers, an important component in small electronic devices. During this time Alice discovered mesotaxy, a technique where metal is grown onto a silicon wafer. Before her discovery, scientists tried it the other way around, attempting to grow silicon onto metal, with little success.

More recently, Alice has done research on optical circuits. Unlike normal circuits that use electricity, optical circuits use light to transfer information signals. This is key for fiber optics technologies such as those used by internet and cable TV providers. Alice has figured out how to place such circuits onto small silicon chips, making them very compact and inexpensive to make. Discoveries like these have a big impact on everything from cell phones to computers.

A Little Bit of Everything
"I think the most exciting thing about being a research scientist is discovering a new phenomenon and designing experiments to try and understand it," Alice says.

Alice’s research at Bell has allowed her to work in many fields of physics, including “low temperature physics, ion implantation and solid-state physics, semiconductor physics, optical fibers, and integrated optics.”

Leading the Way
Now, Alice is Chief Scientist at Bell Laboratories. Aside from managing teams of researchers advancing exciting technologies, Alice is also a mentor for the same fellowship that took her to Harvard. Alice wants more women and minorities to enter physics and get the same kind of support she did.

“You wish that in 25 years the need for these programs would have vanished,” she said, as today women are still underrepresented in physics. “But since I had firsthand experience, and really benefited from [the fellowship] myself, it's something that I'm happy to give back.”

Alice also strives to get a new generation of students interested in physics, giving talks and physics demonstrations at local elementary schools.

Get Support
All throughout her career, Alice has thrived thanks to supportive environments and people, be it her family, teachers, or mentors. Even when things became very difficult, knowing there were people she could look to for encouragement helped her pull through. That's why she now mentors aspiring physics students.

Consider Graduate School
Alice attended graduate school to advance her career at Bell Labs. In spite of all the adversity and difficulty she came across at Harvard, Alice grew as a person and physicist through her experience there. Looking back, Alice says “although [graduate school] wasn’t easy or fun, it was a very good investment.”