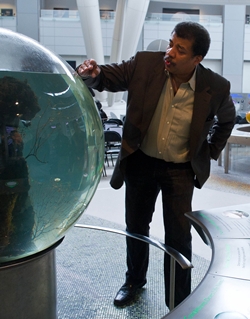 “Called by the Universe”
Growing up in the Bronx, Neil would stand on his apartment rooftop and study the skies through his binoculars. It wasn’t until his parents took him to New York City’s Hayden Planetarium that he got his first good look at the stars. For Neil, the rest was history.

“That first day in the Hayden Planetarium…I looked up, the lights dimmed and stars came out, and I was called by the universe. I had no choice in the matter,” he says.

From then on, Neil was determined to become an astrophysicist, someone who studies the stars and universe. He saved up for a telescope and spent his evenings studying the night sky on city rooftops.

His stargazing habits were not necessarily well received however, as his neighbors would often report him for suspicious behavior. Luckily, he quickly learned to fascinate investigating police officers with a peek through his telescope.

“For all I know, I would have been shot to death on numerous occasions were it not for the majesty of the night sky,” Neil says.

Excitement Meets Academics
Despite his dreams and passion for the stars, Neil was not an academically exceptional student.

“No teacher was saying ‘hey, he’s going to go far, or hey, he’s best in the class,’” Neil says. “I think I was otherwise unremarkable.”

Many did not believe astrophysics was a realistic goal either. Neil was nevertheless determined to pursue his ambitions.

“I have a whole list of things people told me to become…but no one saw me as I saw myself. Not teachers, not those who saw me in the street…no one,” Neil says. “[Concerning] role models…I was an 11 year-old black kid from the Bronx. [In my community], no one would ever become anything no one before them had become.”

It wasn’t until his middle school teacher noticed his love for books on space that he was recommended to attend lectures at the Hayden Planetarium. Soon others noticed his passion, and opportunities opened up for him to take classes and stargaze abroad. At age 15, he gave his first public lecture on astronomy, and began attending the prestigious Bronx High School of Science.

Full Circle
After being heavily recruited by multiple universities, Neil chose to study Physics at Harvard. When he wasn’t learning about the workings of our universe, he was competing on their wrestling and rowing teams.

After getting his BA in Physics from Harvard, he went on to complete his PhD in Astrophysics at Columbia University, publishing research on dwarf galaxies. He also wrote his first book, Merlin’s Tour of the Universe, a collection of answers to the public’s questions about space and astronomy.

As Neil’s love for communicating his passion to others grew, he soon became the youngest director of the Hayden Planetarium, the very place that sparked his original love of the cosmos.

The Pluto Predicament
Ever wonder what happened to Pluto?

After overseeing Hayden’s renovation in 2000, Neil reopened the planetarium with exhibits on the planets- but decided to lump Pluto in with several recently discovered dwarf planets. A reporter at the New York Times wrote about the change, and soon the great debate about Pluto’s planetary status exploded.

“That’s when the hate mail just started rolling in”, Neil recalls. “And I realized that this hit a nerve within people.”

After a flurry of debates among scientists and much public outcry however, the matter was officially settled in 2006. It was then the International Community of Astrophysicists voted to reclassify Pluto as a dwarf planet, giving us our current planetary classifications.

Science for All
Since then Neil has published ten books, appeared on countless televisions shows- including regular appearances on NOVA specials and The Colbert Report- and spoken at conferences worldwide about science and astronomy. He even has his own radio show, StarTalk, where he invites researchers and celebrities alike to discuss current scientific news.

“Only on the frontier of science, physics in particular, have we been able to extend, access to the universe, beyond the capacity of our senses to do so,” Neil says. “The goal is not to make everyone a scientist. What a boring world that would be! What matters is whether they are scientifically literate and maintain that literacy and that curiosity throughout their lives, no matter what becomes their profession.”

Become a Communicator
As a scientist and public figure, Neil believes everyone has a role in increasing scientific literacy. To effectively do so, Neil believes in getting to know your audience, never talking down to them.

“Being articulate is not the same thing as communicating. Communicating is understanding the mind of who you are talking to,” Neil says.

Maintain Your Curiosity
“Kids are born scientists. You don’t have to turn them on to investigating the world around them,” Neil says. “Kids turn over rocks and poke at the millipedes. They pick apart flowers…so you’ve got to put in some ways to keep [that curiosity] going…because it needs to be strong enough to resist the forces that might try to squash it.”

Break New Ground
When Neil graduated from Harvard, he was one of only seven black astrophysicists in the US.

Throughout college, he struggled with his decision, especially after a fellow wrestler at Harvard told him, “blacks in America do not have the luxury of your intellectual talents being spent on astrophysics.”

“I knew my interest in the universe was real,” Neil says. “But my responsibility as an educated member of society was eating away at that ambition. In the absence of another way to think about the problem, I just kept at it with...this guilt that maybe I wasn’t doing all I could to help others.”

As Neil got more involved in educating the general public about science however, he realized he made the right choice. Breaking new ground meant breaking long-standing stereotypes for his community and opening the door for others to follow.