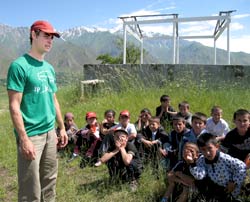 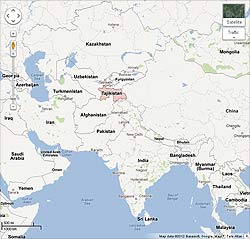 A Budding Interest
Growing up, Middy was an avid kayaker and fan of the outdoors. Middy liked most his classes, but his favorites were always math and science.

Middy was introduced to physics in high school. While he was forced to drop out of Advanced Placement Physics, he was determined to pursue his interest and went on to major in physics at Wesleyan University. True to his well-rounded interests, he also took courses in architectural design and environmental science.

Globetrotting
Upon graduating from Wesleyan with a Bachelor of Arts in physics, Middy moved to France to teach middle school English and pursue competitive whitewater kayaking.

In 2007, his kayaking ambitions brought him to the rivers of Tajikistan, a small Middle Eastern country north of Afghanistan. In Tajikistan, Middy joined Mission East, a non-profit organization working to improve the country’s water sanitation. During this time Middy also helped found Lageri Amerikoii—Tajik for Camp America—a summer camp for rural Tajik children. At Lageri Amerikoii, children ages 9-14 get to rock climb, play sports, and participate in a variety of activities they might otherwise never have known.

Tools for Adventure
How did physics help Middy around the world? Of his many pursuits Middy says, “My career path has not been a linear [one], but all my various work has combined to give me a great set of skills and experiences.” From the logistics of operating Lageri Amerikoii to navigating foreign cultures, physics has provided Middy a “rigorous, analytical way of thinking”, a set of tools that allow him to think through and tackle the daily challenges of work and life abroad.

More than Just Math and Science
In addition to directing Lageri Amerikoii, Middy continues to kayak professionally and serves as an online editor to the kayaking outfitter and news source, Immersion Research. He also helped publish a guide of Tajikistan's unexplored rivers for fellow kayakers. In his active and busy lifestyle, he credits his physics experience with teaching him to continually work hard and pursue his diverse interests, a lesson he finds to be as valuable as the classroom material that originally sparked his interest.

Tap Your Physics Skills
“For me,” Middy says, “physics was not the specific set of skills I needed for my career, but it gave me a great set of foundational tools which I can use to learn other necessary skills.” Whether choosing to follow a more traditional career path or branch out into unexpected arenas, a physics education can provide tools for success.

Get Involved in What You Love
Throughout his life and career, Middy has been unafraid to grab good opportunities and do what he loves. He recommends students do the same. “Dive right in and get fully involved. Enjoy physics and whatever you do!” he says.