From Theater to Gravitational Waves
Jax was drawn to the notion of being both teaching and doing research as a professor since middle school. As an undergraduate studying physics and mathematics at Kalamazoo College, Jax became particularly interested in astrophysics. They sought out a summer experience in the field and were accepted to the Laser Interferometer Gravitational-Wave Observatory (LIGO) Summer Undergraduate Research Program (SURF). Jax credits this admission to their experience in theater as a set carpenter and metal worker. Experience in welding and soldering are attractive skills at LIGO!

Before their research at LIGO Hanford Observatory, Jax had never heard of gravitational waves, but the field was a perfect fit. “It was a right place, right time sort of thing,” they say. They earned their Ph.D. in Physics at the University of Michigan, where they wrote their thesis on commissioning the Advanced LIGO interferometer and searching for gravitational waves from unassociated gamma-ray sources. Then, as a postdoctoral scholar at Syracuse University, they worked to improve the sensitivity of the LIGO detectors.

Physics training involves learning to approach various complex problems, and Jax utilizes this crucial skill to find answers to their research questions. They say, “A lot of [solving a problem] is trying to think laterally but knowing that there really are unifying principles underneath all these weird things that happen.” Jax also recognizes that, even for professors, physics requires learning new things. For example, Jax has had to learn to code in several different languages, some of which are hardly taught anymore, like Perl. “[Without learning Perl,] I couldn’t measure the length of the LIGO arm cavity, because otherwise I wouldn’t have any way to get a signal into it,” they say of their experience at LIGO Hanford. In research, physicists are constantly learning.

The Whole Package
Jax relishes both aspects of their job: research and teaching. As a researcher, they especially find a thrill in coming up with an idea and starting to see the experiment come together. “The first light of an experiment is just really wonderful,” they say. “That rush of feeling like, ‘Okay, we’re getting somewhere, we’ve got it!’ is really great.” 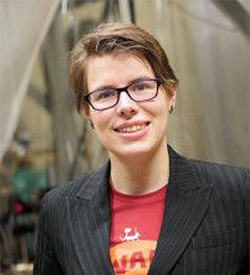 As a teacher, Jax loves hearing about their students’ motivations in physics. Oftentimes Jax’s students will ask them for help with challenging problems from their engineering classes. Jax does not always immediately have a solution, but they are excited to find those “Aha!” moments with their students and to experience learning physics again. “Working with students is probably the most rewarding thing I’ve been doing,” they say.

Finding Stability and Support
The path to a career in academia can be challenging due to the lack of stability moving through undergraduate school, graduate school, and possibly multiple postdoctoral positions in various cities. Jax has found the distance from family and friends to be isolating, especially while working at LIGO Hanford for three to six months at a time. However, now that they have secured a tenure-track position, Jax is excited to be building up a new support network at Marquette.

Reach Beyond Research
Jax stresses the importance of having a diverse skill set. A career in academia requires more than research experience; professors need to manage projects with large budgets. Jax recommends asking your postdoctoral advisor to allow you to observe or assist in some of the managerial tasks to prepare you for a professorship. “There’s a lot of complicated stuff that goes beyond just the science, and it gets thrown at you very fast,” they say.

To be both an effective researcher and teacher, Jax also emphasizes time management skills. Teaching effectively and continuously making improvements without spending the whole week preparing proves to be a challenge!

Physics is for All Identities and Abilities
Jax, who identifies as gender non-binary, is familiar with the tiring chore of having to come out constantly. However, they have become much more open about their gender identity since their postdoc at Syracuse, where a grad student said that ze felt more comfortable coming out as non-binary because Jax was non-binary. “If I can put myself out there, be a little uncomfortable occasionally, make people uncomfortable, but also make a slightly more comfortable space for other non-binary people, especially students, it makes me feel pretty good,” Jax says.

To any member of the LGBT+ community, Jax recommends finding allies within your department. They have found their own department’s members to be largely willing to listen and change, and they are especially appreciative of their students for being so accepting.

As someone with ADHD, Jax also encourages students to take advantage of the accessibility resources provided by their institutions. Jax finds that often students think that they will “grow out of” their ADHD or learn to overcome their symptoms on their own; however, recent studies have shown that although people with ADHD tend to become more socially aware of their hyperactive symptoms and are able to handle them outwardly, the internal symptoms that make life difficult remain. Jax says, “As professors, we want you to succeed, so talk with us, and talk with us early.”