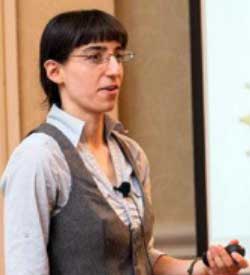 An Agent of Change
In high school, Brenda saw the social and biological sciences as a “path toward helping change the world for the better.” Once she reached college, however, she had a change of heart. “After sampling many disciplines’ schools of thought,” Brenda says, “I was struck by the power of simple ideas in physics.” She saw that many other disciplines move forward very slowly, and that some fields of study can take decades to validate new ideas.

“What attracted me to physics was that simple ideas, if verified, can very quickly alter the course of the field. Take Einstein’s theory of relativity or Planck’s idea of the quantum or Feynman diagrams as cases in point. As such, a single person’s efforts can amount to something profound in physics. That notion is what initially drew me and continues to draw me to physics today.”

The Best of Both Worlds
As Brenda explored potential career options during graduate school, she knew that she wanted a balanced life between research and mentoring young scientists and between her professional and private life. “After spending a few summers at the national labs, I realized that lab scientists get the best of both worlds in this regard - while they often mentor other scientists, they still have the opportunity to conduct their own research from day to day.” Brenda enjoyed this work-life balance. “The combined ability to pursue my own research - as well as some of my own private ambitions - drew me to the [national] labs.”

Brenda became a postdoc at Lawrence Livermore National Laboratory (LLNL), one of the Department of Energy’s (DOE) premier labs located near San Francisco, California. She combined her own research interests with the research priorities at LLNL including energy and biosecurity, and she applied for her own grants. Her main focus involved developing techniques to improve the accuracy of studying the chemistry of heavy elements.

Although Brenda found great mentors and great science at LLNL, she missed teaching. “I ultimately realized… that I do like the balance of being able to mentor people for a certain part of [the] day but then also to be able to do serious science around those times,” she says. The university setting provides more opportunities for interacting with students than national labs do; therefore, she applied and interviewed for faculty positions in both physics and chemistry departments after her postdoc. She accepted a position at Brown University in the chemistry department where she is now an Assistant Professor.

A Day in the Life
As a postdoc in a national lab setting, Brenda spent her day working on research projects involving deriving, programming, and analyzing computational data. The rest of her time was spent writing proposals, attending seminars, or meeting with colleagues to develop collaborations or discuss mutual projects. She especially enjoyed the vast opportunities for collaborating with researchers from other fields. “Compared to the way I conducted research during my tenure as a student, I find collaborating in this regard exhilarating. Almost every day I learn something new about a completely unexpected scientific topic!”

“As a professor now, my day is much more divided,” Brenda says. In addition to research, she also focuses on teaching and service. She spends more time mentoring students, both at her university and in the wider community. “I always invite a number of high school students to work in my lab over summers and sometimes over the school year.” Instead of having one or two research projects to work on at once as she did at LLNL, her research is now divided into ten to twenty different projects involving various mixes of scientific fields and ideas. “I definitely do work longer hours but, because of that mix, it’s actually more exciting for me because I get to switch things around a little bit.”

Despite longer work hours, Brenda is satisfied with her work-life balance. “I’m more excited to do the work that I do because it’s continually sort of fresh and novel and revolving, but at the same time I have less of an opportunity to spend [time] on other things in my life.”

Classical Molecular Computing
Brenda’s research is on the border of physics and chemistry. Currently, Brenda is part of a project aimed at creating a classical molecular computer. “For a couple of decades now, people have been actively working on building architectures for quantum computers, but the question we’re asking is, let’s throw out the quantum, can we just make molecules perform operations for us, and can we make them store data?” Her team has figured out the storage piece of the problem, and they are now working on understanding how molecules can compute for us.

Sample Different Positions
“If you’re not sure [about the physics career that will work best for you], try to sample. Do an internship, see what it’s like.” Internship programs at national labs, in industry, or elsewhere can act as a springboard toward becoming a staff member. Brenda advises students to apply for an internship and work hard in your position. Impressing your mentor could earn you an invitation back or even a job offer.

“We need more physicists! Physics is a lot of fun. Sometimes it takes a little perseverance to get there, but once you’re there, it’s a lot of fun playing with ideas. I really couldn’t imagine doing anything else that would be so intellectually interesting.”

Collaborate
Brenda encourages students to find role models who can help them learn to engage with other scientists. “Solving problems on your own… does not teach you the tiniest amount about how to effectively collaborate with colleagues,” Brenda says. “As strong as you may be as an individual scientist, you are always improved by maintaining a close set of scientist friends that can challenge your ideas and help mentor you through your career.” Being a research scientist requires collaboration on projects at every level.

Work on Interpersonal Skills
Although raw scientific skills are important in academia, professors also require leadership and interpersonal skills for interacting with students. “All students have completely different personalities, completely different needs. They’ll work with you in very different ways.” These skills are also required at the faculty level. Because professors work on proposals and initiatives in teams, they must work with and organize a large range of people. “I think [knowing how to organize people and deal with everybody’s diversity is] actually the most important aspect of the job,” Brenda says.