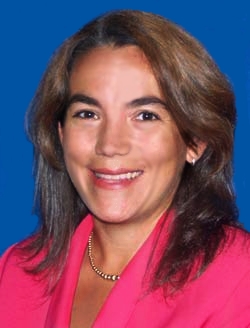 Finding Her Calling
Muskogee, Oklahoma, population 39,000, is in a rural area between the Native American Cherokee and Creek nations. It is also Lynett Rock’s hometown. The area is so rural that when Lynett, a member of the Cherokee Nation, was a high school student in the nearby town of Warner, the school’s physics class had to be beamed in via satellite from Oklahoma State University. Her graduating class had just 30 students.

As a high school senior, Lynett wasn’t planning on a career in physics—she thought she’d be an accountant or a math major. But applying for and receiving the American Physical Society's Physics Minority Scholarship changed that.

After taking her first university physics class, “it was obvious that this was what I was supposed to do,” Lynett says.

“Everybody has something that they get to be very good at, and physics just happens to be my area.”

Lynett might not have found her calling until college, but she had long been fascinated with figuring out how things work. Her parents encouraged this, and made sure she had opportunities to satisfy her curiosity.

Turning Isolation Into Success
"Although Muskogee is small, it is a very diverse place," says Lynett.

Her university science classes, however, were not. As a woman and a Native American, Lynett recalls, “I wasn’t like anybody else- I was definitely different."

But instead of feeling isolated and discouraged, Lynett said her uniqueness made her feel more determined to succeed. “I wanted to make sure that I represented my race and my gender to the best of my ability, and that I succeeded where so many others had not yet,” she says.

Through the APS scholarship, Lynett also received additional help. The scholarship included funds to support physics research with the professor she worked with, and he made sure she was able to benefit from that. “He was always building something, and I got to be his helper,” Lynett says.

After getting a degree in engineering physics, Lynett continued on to graduate school, where she studied how electrons moved through glass with different properties. The goal of her project was to come up with the perfect glass for use in space shuttles.

A Career That's Close to Home
Initially in graduate school, Lynett did not have specific plans for her future.
“I was so excited to be able to get my graduate degree, I hadn’t thought much past that,” she says. But Lynett remembered both her mother and her aunt had been teachers, and as a high school student she had enjoyed tutoring younger students.

So, after getting her master’s degree in physics, Lynett began teaching high school physics. When a position opened at a junior college in her hometown Lynett took it, and she and her family moved into the house next door to her parents. She now teaches math and physics at the junior college and is the Division Chair of the Math and Science Department.

Supporting the Next Generation
Lynett enjoys showing students that math and science are not only within their reach, but very enjoyable. Many of her students plan to become teachers, and she likes knowing she’s preparing future teachers to educate students to come. “I believe teaching the next generation has a huge impact on the future,” she says.

She also wants the next generation to realize it can do whatever it wants. Lynett says she always tells her 12 year-old daughter there is nothing that anyone else has done that she can’t do. “And, just because someone hasn’t done it before, doesn’t mean she shouldn't,” Lynett says.

A 'Flair' for Teaching
Lynett is still teaching and reaching out to students as the Division Chair of the Math and Science Department at Connors State College in Warner, Oklahoma. In addition to learning the administrative aspects of her job over the past few years, Lynett also teaches a variety of courses including general physics, calculus, college algebra, math structures, and modeling geometry for elementary education majors.

“Of course, I enjoy physics and calculus the most,” she says. “They challenge me to constantly think of new ways to present the material.”

Recently, Lynett took her class to the playground so that they could explore the concepts of torque on swings and angular momentum on the merry-go-round. “Not only did my students do some interesting physics, but they were laughing and having a good time,” she says. “I am a firm believer that our classes should be fun!”

She’s also working on incorporating more technology into her lectures to enhance her teaching methods. For example, she’s increasing the use of graphing calculators in the classroom and requires all lab reports to be turned in via email. “I want my students to leave my class with increased computers skills,” she says.

While her mother, a former math teacher, was a huge inspiration for her own teaching, Lynett admits that teaching require a certain “flair”—the ability to make a complex subject simple. Lynett says that ability is necessary to succeed as a teacher. “Without that flair, I would have no business teaching,” she says.

There's More Than Research
Lynett wishes she had known that there are jobs out there using physics that do not involve research. “We hear so much about the high profile research jobs that we overlook the other aspects of physics,” she says. There are positions available in a variety of areas outside of research, from academia to industry.

Grab Those Opportunities
She urges students to seize the opportunities that are available to them. “Internships are out there to open up the job market,” she says. They’re a great way to pick up skills and experience that can give you an edge when applying to schools and looking for jobs.

Refuse Defeat - Keep Working
She cites hard work and refusing to accept defeat as her main strategies for success. “If you want something badly enough, you can usually make it happen,” Lynett says.

Torque
A turning or twisting force, like the kind applied when using a wrench. It occurs when a force is applied and causes rotational motion.

Angular Momentum
A measure of an object’s tendency to continue to spin.