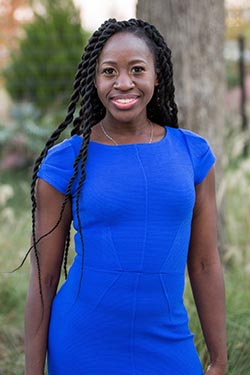 A Strong Role Model
Since childhood, Julie has loved science. Her curiosity fed her desire to understand natural phenomena through equations, but she lacked a scientific role model. Her world changed at age eleven when she saw a picture of the astronaut Mae Jemison on the cover of a magazine. “Dr. Mae Jemison typified everything that I wanted to be… I could be fabulous and look like me and even have natural hair. I didn’t know that was possible,” Julie says. “Although she wasn’t a physicist, she showed me that I could literally leave the earth with anything that I learned.” Julie decided that she wanted to be as bold as Jemison and work for NASA as a researcher or astronaut.

Overcoming a Stumble
Julie knew that she needed to study physics to make it to NASA. When she found that her peers were intimidated by the subject at her high school in Miami, she decided to take her first physics course in the summer when she would be able to give it her full attention. On the first day, however, the teacher was visibly shocked to walk into the classroom full of mainly Latinx and African American students. The woman set her physics book down on the podium without a word, left the room, and never returned. “I was just excited to learn, and all my friends [in the class] were the nerds of our school, so we didn’t understand how someone couldn’t want to teach us,” Julie says.

At that point, instead of deciding to pursue a different career path, Julie clung to the fact that the teacher was a woman. Although that woman was not an ally, Julie had a sign that she could also succeed in physics. She began teaching herself with the intention of becoming an astrophysicist, and after high school, she went to college to study physics.

First Encounter with Medical Physics
Just before Julie’s senior year of college, her mother was diagnosed with breast cancer, and she began to realize the importance of medicine. As she sat with her mother for her radiation therapy, the doctors called in a physicist, much to Julie’s surprise. “I don’t have to be an MD to help someone with cancer?” she asked. The man explained his job in medical physics and pointed her to the American Association of Physicists in Medicine (AAPM) website where she could learn about PhD programs in the field. “At that moment, once I saw that this man was changing my mom’s life… I just changed full circle, I decided to have a new focus, and I applied to every program.” After being accepted to a number of medical physics programs, she decided to attend the University of California, Los Angeles to earn her PhD in Biomedical Physics.

The Disney World of Cancer Centers
After earning her PhD, Julie decided to become a clinical medical physicist to interact with patients rather than only doing research. She completed a clinical residency program at the MD Anderson Cancer Center at the University of Texas where she remains today as a Service Chief in the Thoracic Physics Service. Julie refers to the center as the “Disney World of Cancer Centers” due to its immense size, and she loves her work treating patients with thoracic tumors. “It’s the best marriage of all my best qualities… I love to talk, I love people, and I love science, so [the job] can’t get better than that, and I get paid to do it.”

In addition to her clinical work, Julie is also an Assistant Professor. She teaches graduate students, medical residents, and medical physics residents, and she performs research that is relevant to her clinic. “I’m always trying to figure out how to best, [most] efficiently treat a cancer patient with a thoracic tumor,” Julie says. For instance, she has addressed the challenge of motion management in radiation therapy; because patients move with respiration, targeting tumors with the radiation beam can be difficult. Julie has invented new technologies to combat this issue in order to reduce treatment time and improve patients’ experiences.

A Day in the Life
Typically Julie spends her mornings with patients at the treatment vault where she handles the linear accelerator. To ensure that the idealized radiation treatment plan is followed as closely as possible, she aligns her patients and calibrates the accelerator based on tolerances typically within 2mm. Each treatment plan is customized for a particular tumor in its particular location. During the treatment, Julie is called in to fix any issues that arise. “[The work is] really interesting, and it’s completely bloodless, so I love it,” Julie says. “You’re on your feet, you’re making sure that you’re keeping track of all the errors and are adjusting things as necessary, and really just being a problem solver.” After the treatment, Julie reports the deviation from the idealized version of the treatment to the doctor, and she then spends the afternoons completing the rest of her responsibilities such as teaching and doing research.

Human Interactions
Being able to use her physics skills to help people has brought peace to Julie’s life. She builds trust with patients throughout their treatments and provides comfort to them. Because of her expertise and communication skills, patients realize that they are safe despite the menacing appearance of the eight-foot tall accelerator. Some patients who were so terrified during their first treatment that they were unable to sit still have developed such strong bonds with Julie that they hugged her goodbye after their last treatment. Julie finds these interactions with patients to be one of the most rewarding aspects of her job.

Find a Role Model
Julie stresses the importance of having a strong role model that you can learn from in the same way that she learned from Mae Jemison. She especially suggests learning from role models with lifestyles that you would like to emulate.

Use AAPM Resources
For students interested in pursuing medical physics, Julie recommends utilizing the AAPM website to search for graduate schools. You can find programs with a variety of focuses such as therapy, research, and imaging. Once you have found schools that you are interested in applying to, you can ensure that you have completed all necessary prerequisites for getting into those programs. Additionally, Julie advises students involved in the Society of Physics Students (SPS) to choose AAPM for their free membership to learn about fellowships and research experiences available through the organization.