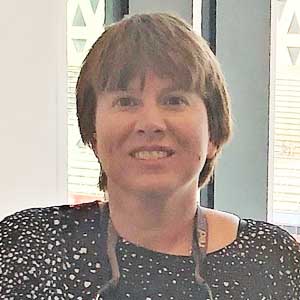 Fundamental Science
Until her senior year of high school, Kathy had planned to major in chemistry. “I always loved science,” says Kathy. That year, she took a physics course and it changed her mind. Kathy decided that she would major in physics in college. Kathy was drawn to physics because she felt that it gave her a basis to understand many subjects.

“Physics seemed to be the most fundamental of the sciences that I had studied, [physics gives] you insights into many different fields.”

Radiation Detection at National Labs
During college at Eastern Kentucky University, Kathy originally aimed for a career at NASA. As she progressed through school, Kathy became more focused on radiation detection and found herself interested in a career in the national labs. Kathy went on to work at the Thomas Jefferson National Accelerator Facility to complete her thesis research, and received a Ph.D. from Old Dominion University.

Kathy decided to move toward applied physics, and accepted a position at Pacific Northwest National Laboratory (PNNL). She continued working on radiation detection systems for various security applications, including the development of systems to scan cargo as part of a radiation monitoring program. “After working on the program for a few years, I decided to apply for a federal position... where I could work on the radiation detection program at the headquarters level.”

Working for the U.S. Government
“I serve as one of the radiation detection subject matter experts,” Kathy says. Her job changes a lot from day to day, but Kathy says she often tests the radiation detection sensitivity and functionality of new equipment, defines equipment requirements, performs data analysis on data from deployed systems, and writes papers on results. She also represents her department in meetings with other government agencies and at the White House. Kathy uses a lot of the skills she learned through her physics background. “I get the opportunity to collect data at our field sites in (sometimes) remote locations,” she says. “During my thesis research, I had the opportunity to work on many different types of radiation detection equipment and perform analysis of data taken by detection hardware… I use those skills a lot today.”

Practice Writing at All Levels
While it is important to be able to communicate your research to scientists in your field, learning how to effectively write and present your work is imperative. Kathy works with a lot of non-technical people, and she still needs to be able to communicate with them, “without diluting conclusions.” Kathy says practice makes perfect, so start early! “When I was a grad student I volunteered to give as many presentations as I could, so that I had plenty of experience with public speaking at all different levels.”