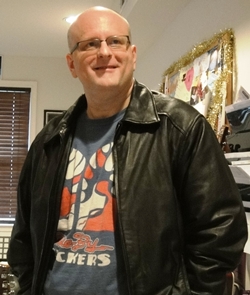 Career Options
Mike grew up in a 500 person town in Missouri. In school, he was a bright student and class clown with a love for writing. And while writing was his first love, Mike didn’t see a future career in it:

“In my town, I had never seen an example of someone making a living through writing. All I’d ever seen were retailers, farmers, and one engineer, my uncle,” Mike says. “I didn’t know it was possible for me to make a serious career out of it.”

So Mike set his ambitions high on the booming field of neuroscience, the study of the brain. Things changed after senior year of high school however, when Mike took his first physics class.

“I thought, ‘oh my goodness, this is so much better than biology’,” Mike says. “It’s a different, clarified way to look at the world and I really enjoyed it.”

After graduating from high school, Mike received a scholarship to Murray State University and got his B.S. in Physics.

A Mighty Distraction
In the 1980’s, standup comedy skyrocketed in popularity. It reached a peak in the late 80’s with over 5,000 comedy clubs established nationwide. Hailing to his class clown roots, Mike loved comedy and had done some standup in his undergraduate years. So when he chose Vanderbilt University in Nashville for graduate school, it wasn’t just for the physics program.

“Nashville had one of the oldest comedy clubs at the time, and I decided to do standup while attending school, which proved to be a mighty distraction,” Mike recalls. “It was a ton of fun.”

So much so, Mike ended up dropping out of school to pursue comedy full time. While he proved fairly successful, regular jobs were hard to come by. So Mike worked as a systems analyst during the day, providing mathematical modeling and software design for telecommunications.

“I met the finest, smartest people I have ever known,” Mike says. “But I wasn’t happy. I wasn’t really doing the thing I loved.”

Writing a New Chapter
Mike began looking for a way to pursue his passions, and since comedy wasn’t working out, he returned to writing. He started off writing interviews with comedians for a local newspaper, and soon began to pick up more jobs. Even though he hadn’t taken an English class since high school, Mike believes physics prepared him to write critically and efficiently.

“Physics teaches you how to think, how to break something down, find its flaws, and reassemble it,” Mike says. “It makes you a thoughtful and critical writer.”

Seeing for the first time it was possible to make a living doing what he loved, Mike decided to pursue political writing in Washington, DC.

“I saw DC was the best place for writers. I was surprised to find many of them, particularly speechwriters, didn’t even have backgrounds in journalism! So I found a job and moved there for a salary approaching nothing with my wife and son,” Mike says.

The risk paid off as Mike continued to move up in the writing world. His big break came when Senator Fred Thompson hired him as his personal speechwriter. After that, he joined a consortium of freelance writers known as the White House Writers Group, where his clients included business executives and several presidential candidates.

Since then, Mike has become an adjunct professor at Georgetown University teaching public relations, penned over five plays, and written numerous books. He hasn’t left comedy either- Mike’s credits include consulting for Saturday Night Live and the satirical newspaper The Onion.

“I work for myself…I feel very fortunate at this point in my life. I get to speak, I get to write- it’s a very good life and I couldn’t be happier. Concerning physics, I don’t think I would have done anything differently. Physics is what made me an unusual and successful writer.”

Physics is a Life Skill
“You may love physics, and just not know it,” Mike says. “If you crave order, if you imagine there is more to the world than mere opinion, it’s the way to go. What distinguishes it from other sciences is that it ultimately it teaches you how to think- if you can master the technique of learning physics, you can learn pretty much anything, and it will make you better at whatever you want to do.”

Enjoy Your Work
“When you pick a career, the only question you should ask is ‘what looks like fun?’” Mike says. “The goal is to get up in the morning and do what you like. So many people say, ‘I’m going to find something that makes enough money so I can enjoy the rest of my time’- and that’s just a terrible mistake. You have to integrate your love with your work.”

Don’t Rule Out Options
Mike initially ruled out writing as a career because he didn’t know if it was a practical career option. He leaned towards physics and biology because even though he didn’t know many professional scientists, he knew the sciences were thriving, mentally-challenging fields with many job opportunities.

Regardless of what fields or subjects you are interested in, if you aren’t familiar with available career options, don’t rule them out. Research about them online and reach out to possible mentors.

“If you really truly love it with your heart…find a way to do it,” Mike says. “The very best thing you can do is get paid to be yourself.”