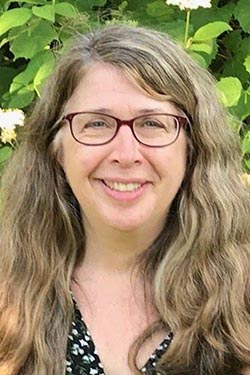 Studying the Universe
Wendy intended to major in math in college because she had enjoyed the subject in high school. However, she changed her mind when she took an astronomy course during her first year. She fell in love with studying the universe and decided to instead major in astronomy and physics. Although her school was small, it was part of a five-college program in Massachusetts that allowed her to experience a wide variety of astronomy courses at multiple institutions, and she enjoyed the material she learned.

Observational Astronomy Experience
One summer, Wendy had the opportunity to observe at Mount Hopkins where her advisor was doing his research. Her responsibilities mainly involved aiming the telescope and collecting data from the computer room. Although she realized that observational work was not what she wanted to do, she did not lose her interest in the field.

Lack of Jobs
Upon graduating, Wendy realized that there were not many jobs in astronomy for bachelor’s degree holders at the time. Rather than pursuing an advanced degree, she joined the family business, although she expected to dislike the work. At the time, the company published an optical magazine founded by her mother called the “Optical Spectra.” Wendy started working odd jobs for the company and eventually made her way to marketing. “As I became more involved with what was going on… I found that I started enjoying what I was doing,” Wendy says. “My parents did an amazing job [starting] this company and creating products with a sense of what was needed in the industry.”

Advancing the Company
By the late 1980s, the company was the best in photonics advertising and had the largest circulation of the magazine services in the industry. However, Wendy found that working in a small business required dedication and perseverance to compete with the large publishing houses. Wendy and her team worked especially hard to maintain a clear boundary between advertising and editorials. They also improved the magazine by finding stories through scientific journals and researchers in addition to those from photonics companies in industry. “In [photonics], a lot of the innovation still comes from all the researchers. You might find someone working on this little thing that ends up being something very large down the road,” Wendy says.

Wendy expanded the company by opening an office on the west coast. She visited photonics manufacturing companies to learn more about technology in the industry and found that she enjoyed directly learning about new science. After moving back east, she took over all of sales. With the help of Wendy and her team, the company won editorial awards and started performing innovative research in addition to publishing. Wendy’s experience working in various aspects of the company benefited her as she became more involved in management, and she also used her expertise to start a small side business doing confidential consulting work in sales and marketing for photonics companies.

Becoming a Teacher
After 30 years of working in publishing, Wendy decided to leave the field due to challenges including working 60-70 hour weeks, but she continued consulting for the Optical Society of America (OSA) and other companies. On a whim, she half-heartedly applied for a teaching job at Berkshire Community College. Two years later, she received an offer from the college to help teach physics laboratory courses. Because she was between consulting jobs at the time and was interested in getting more students involved in physics, she accepted.

As she assisted students in the lab, the department head asked her to teach a course the following year, and she hesitantly agreed. “Doing a sales presentation and teaching are completely different things,” Wendy says. “I have probably been more nervous in front of a classroom than I have been in front of a room of a hundred people.” She particularly feared failing to help her students understand the material. However, Wendy gained experience and confidence and now teaches two or three classes each semester. In addition, she gives career advice to STEM job seekers, works to involve students in internships, and teaches math workshops to students interested in improving their college placement scores.

As a teacher, Wendy intends to address the issue that many college students have never taken a physics class before college. “How can we expect people to be interested in physics if it’s not part of the K-12 curriculum?” she says. “Once you start showing people that physics is not just math, you get a lot more interest.” Wendy is working on informing schools in her community of this concern.

Try Photonics
Wendy encourages students to explore photonics. “It’s a wonderful field… It’s still one of the most innovative [fields] in physics,” she says. She especially relishes the friendly nature and openness of scientists working in photonics. “People like to share with you their excitement of what they’re doing.” You can learn more about photonics by taking an optics class or by trying an internship in the field.

Surround Yourself with People You Can Learn From
Wendy once asked Milton Chang, a prominent figure in the photonics industry, the key to his success. He told her that instead of hiring people that make himself look better, he hires intelligent people that challenge him and improve the company. Wendy took this advice and learned to hire employees that could tell her if she was wrong. This advice can also be applied to students; surround yourself with people that will challenge you and help you to grow.

Take Risks
Wendy acknowledges that changing careers can be beneficial. “There are so many opportunities out there, but you’ve got to take risks,” she says. For Wendy, becoming a teacher was a risk, but she found that leaving publishing was the right choice for her.