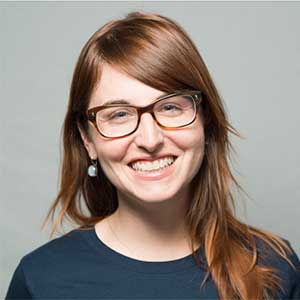 Learning Differently
Although Jessica excelled in fine arts subjects growing up, she struggled in core academic classes. She loved math, but her high school math teacher told her that she would be incapable of learning calculus.

Jessica was later diagnosed with a learning disability similar to dyslexia that affects reading and writing. Jessica says, “The way that I frame [my disability] is that the neural paths in my brain that connect and decode the words I see and assign meaning to them are really jumbled. So for me, it takes a really long time to interpret written words or to express my thoughts in written words.” Once Jessica was diagnosed with her disability and was able to receive accommodations, her performance in core academic classes improved significantly.

Choosing Between Physics and Theater
Since neither of Jessica’s parents worked in technical fields, she at first did not understand the practical applications of math. However, her first physics class in high school made her realize that physics uses math to understand the world. Jessica performed so well in the subject that her AP Physics teacher told her to pursue physics in college. “That was the first time a teacher had ever said to me, ‘You have a talent, you should do this,” Jessica says.

Jessica recalls talking to several physicists before settling on her major. Because of her learning disability, talking to people was far easier than reading about the applications of physics in books or online. These conversations made her realize the large range of careers available to physicists and also helped her develop a strong network of scientists.

Jessica felt conflicted as she entered college because she was passionate about both physics and theater. She decided that in her first year, she would take an introductory theater class and an introductory physics class, and she would choose between the two majors based on whichever class she performed better in. At the end of the semester, Jessica did not even have to take the final exam for her physics class, and she earned the worst grade of her college career in the theater class. “I thought, ‘Okay, this is the universe telling me that I should study physics,’” Jessica says.

The Perfect Fit
After graduating college, Jessica earned her Ph.D. in Astrophysics at the University of California, Berkeley. Since she was unsure of which career path to take after graduation, she applied for a variety of jobs. When she received multiple offers, Jessica chose to work in the tech industry because she knew that if she did not like the job, she could re-apply for academic positions the next year. “What attracted me to tech in particular was that it felt like a good way to apply my technical skills but in a way that was more down to earth,” Jessica says. “A lot of my astrophysics research work was very obscure and theoretical.”

Data science also conveniently accommodates Jessica’s disability. For example, she can find her mistakes in code easier than in writing since code is able to be tested. Additionally, since another individual usually looks over coworkers’ code in the tech industry, Jessica has an extra opportunity to correct mistakes. “People have been really understanding and I think I’ve gotten better with my own work-a-rounds such that [my disability] doesn’t impact me as much as it did when I was in school,” she says.

Different Flavors of Data Science
After graduate school, Jessica began working at a startup called Yammer, Inc. She has since worked for a variety of companies such as Microsoft, Chegg, and Slack, and her role as a data scientist has varied throughout those positions. For instance, at Yammer, she functioned mainly as a product analyst as she performed simple calculations on large data sets to make decisions. Specifically, she helped the company determine the factors that were or were not beneficial for the product. In her next job, she worked as more of a data engineer as she built systems, but she also was an analyst and machine learning data scientist. Now, at her job as Director of Data Science and Digital Exploration at KoBold Metals, she focuses more on modeling and machine learning. Her current project involves trying to find new mineral deposits; through data algorithms and machine learning, she predicts where there might be new sources of battery minerals. In parallel with this work, Jessica manages the data team and coordinates with other teams across her company.

Looking Forward
The average tenure in the tech industry is about eighteen months. This short length of time is partly due to the existence of startup companies, which do not always succeed. Additionally, technology is evolving quickly, and workers tend to migrate to the companies with more advanced technology. A data scientist may also leave a company to secure a more senior position by accepting a better offer from another company.

Jessica’s long-term goal is to create her own company that solves problems with a social impact. She is currently building up her experience to prepare herself for that role. The company Jessica works for now is relatively new, and she is helping to build it from the ground up through responsibilities such as recruiting and hiring members for her team. She guesses that she will remain in this position longer than average since the company is in the development stage, and she is playing a role in that process. Additionally, Jessica is realizing that she missed being in a job involving physical science; she is enjoying learning about geology and thinking about physical systems again.

Focus on Skills Over Status
Jessica has learned that the tech industry generally does not place a strong emphasis on degrees or pedigree. “I have been at companies where the CTO didn’t graduate high school, and I have been at companies where many people have Ph.D.s. I would be very surprised if any company would not consider an otherwise qualified candidate for a data role just because they didn’t have a certain degree.”

Learn to Build Projects with Code
Jessica has found that physicists tend to do well as data scientists due to overlapping skill sets. In particular, she believes that coding is the single most important skill she learned as an undergraduate. She highly encourages students to learn a commonly used language such as Python or R and to going beyond simply learning to perform simple computations in these languages. “Try to learn how to build things,” she says. Writing code that other people can use can be done in classes, research, as a side project, in a hackathon, or elsewhere.

Build a Strong Network
Jessica recommends interacting with as many students, faculty, and industry workers as possible. “[Getting a job is] much easier if you know someone who can get your resume in the hands of the right person,” Jessica says. One method of developing a strong network is through LinkedIn. If you see someone on your feed who is working on something that interests you, Jessica suggests inviting them to coffee and asking if you can pick their brain. Although Jessica is not naturally the most confident, outgoing person, she has worked on the skill and now loves talking to people.