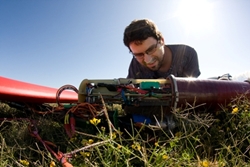 The Power to Invent
Kenny says he chose to study physics because, "at heart I’m an inventor. I like to create new and useful things."

"But to create truly new inventions, you need to understand how and why things work down to the last detail, which requires physics.”

Kenny loved the freedom physics gave him to use all his creative and innovative skills. In 2003, he graduated with a degree in physics from the Massachusetts Institute of Technology (MIT).

Nano-Discoveries with Big Effects
After MIT, Kenny went to University of California, Berkeley for graduate school, receiving his PhD in physics. His research was focused on carbon nanotubes, incredibly small cylinders of carbon atoms that are stronger than diamonds. Carbon nanotubes have other special properties as well, such as being able to act as receivers, or ‘nanoradios’.

Kenny’s job is to design the systems that control these aircraft. In 2011, Makani Power was awarded the Popular Mechanics Breakthrough Award for their innovations.

Physics Gives You Wings
How did Kenny go from nanotubes to wind energy?

"Energy will be one of the great problems facing humanity in the 21st century,” Kenny says. “And physicists, with their strong technical background and physical intuition, are especially well positioned to attack this problem.”

Kenny’s interest in renewable energy, combined with his love for sailing and kite-surfing, got him especially interested in advancing wind power. Even though Kenny doesn’t have an engineering degree, his physics education has more than equipped him for success in his current job.

"A solid understanding of fluid dynamics is critical for anyone in the wind power industry," Kenny says. “However, the math used is essentially the same as that for [Electricity and Magnetism, a standard physics course], so it was easy to pick up."

Start Researching Early!
Kenny recommends all students get involved in research as early as possible.

"It doesn't matter if you don't know enough physics yet; you'll learn what you need as you go along. There are a surprising number of research tasks that don't require in-depth knowledge of the field.  By starting early, you'll discover what sort of research appeals to you," Kenny says.

"When I was an undergrad, I dabbled in particle physics, fusion research, and quantum computation before settling on condensed matter research, which appealed to me because of its applied nature, and because I got to 'get my hands dirty' building experiments."

Make Connections
"Once you settle into a lab, form a relationship with your professor. Devote a significant chunk of your time to your lab, more than just a few hours a week.  Go to the group meetings.  Figure out how you can contribute to the research.  Ask a lot of questions.  A professor who can vouch for your research abilities and work ethic is as important, if not more important, than grades or test scores."

Build Up Basic Skills
"Learn to program, build basic circuits, and use the machine shop," Kenny says. "These skills will instantly make you useful to any lab, and they're transferable across a broad range of fields from physics to biology."

Be Excited About Your Work
Kenny believes students should find work that excites them.

"To be sure, research involves a lot of hard work, failed experiments, repetitive tasks, etc... but, if you don't find the overarching goal exciting, it might be time to try a different research project or different field."