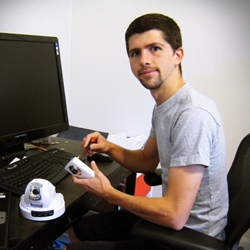 No Boundaries
When picking a major at the Massachusetts Institute of Technology (MIT), Rhett chose physics over engineering because it would provide him with a broad base of skills he could apply to any task.

"I wanted to be able to invent things and solve problems without being bounded by current engineering conventions or practices,” Rhett says. “I'm always able to tackle and solve a problem using the mathematical, analytical, and software modeling tools I used in physics."

Rhett completed his BS in Physics. Interested in nuclear energy, he stayed at MIT to complete his Masters in Nuclear Engineering.

The Opportunist
Rhett knows a good opportunity when he sees one.

When he was in college, the online auction site eBay was growing in popularity. Rhett saw that nothing forbade automated bidding, so he developed an online service called Snipe Swipe, which bids highest at the last possible second for paying users.

With his entrepreneurial eye for detail, Rhett also noticed lawyers dealing with patent files much preferred having them in a PDF format, rather than their standard TIFF file format. So Rhett jumped to action and developed a paid TIFF-to-PDF file converter service.

Rhett’s opportunism even drove him to try and break the obscure world record for long-distance crawling. Unlike his businesses, that attempt ended a miserable sixteen hours and 10 miles later, when an exhausted Rhett collapsed along MIT’s Infinite Corridor.

Throughout the rest of his undergraduate years, Rhett chased down a number of other web businesses, built competition-winning robots, and ran for student office. Through it all, his physics education was continually developing the technical know-how and thinking to pursue bigger and better ideas.

Safe and Sound
After a brief stint in nuclear engineering, Rhett returned to programming work. He went on to co-found Camm Security, Inc., a company that develops video security cameras which can be viewed almost everywhere- including your iPhone.

You could think of the products that Rhett produces as cameras, but he says they're really more like computers (they run the Linux operating system). In addition to writing the open source software that runs on the cameras, Rhett's company also developed and supports a web service which interfaces with the cameras. Subscribers to Rhett's services can store their camera footage on his company's system and access the footage from anywhere online.

His goal is to rethink the outdated technology used in surveillance systems, and make them affordable and practical for everyday people.

Nonstop Innovation
Rhett has since also worked in consulting and started up other companies, most recently GitHire, a programmer hiring service.

Rhett saw the traditional job application just wasn’t effective in screening and hiring the best programmers. For a fee, GitHire alternately offers to quickly find companies the talented programmers they need based on their skill level. Prospective programmers establish their abilities by posting samples of the best code they’ve written, and receiving increased rankings as they’re repeatedly hired by client companies. The result is a database of programmers categorized by their specific skills, ranking, and location.

For Rhett, the ideas never stop. He knows that all great inventions have risen through opportunity and- who knows?- he may one day found the next Facebook or LinkedIn. Physics has enabled and equipped Rhett to have a varied career as both an entrepreneur and engineer, tackling the problems he finds interesting.

Grab Opportunities
Although his education put him on track to nuclear physics research, Rhett followed his interests and has made a career out of spotting problems and developing products that provide solutions. Rhett has explored many fields and tried his hand at product design, programming, and business.

Equip Yourself
In order make his ideas more than fantasy, Rhett needed a broad base of technical skills- that’s where physics came in.

Even looking back to his college days of innovating in robotics, Rhett recalls physics providing all the tools he needed for success.

"Designing the robot required solving problems that spanned a few engineering disciplines. This included making analog sensors, a mechanical drive system, the electrical system, and the software to control the robot,” he says. “We were able to break down all of the problems and solve them with the same rigorous approach that physicists use to solve all problems."