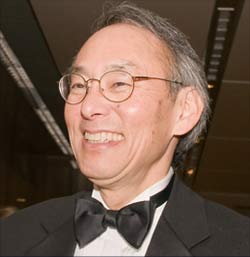 Family Black Sheep
Nobel prize winner Steven Chu comes from a family of academic elite, where he is considered only average and an “academic black sheep.”

Of course Steven studied and did well in school; but, as a child, he often had more fun pursuing other interests: model airplanes, sports, and reading bursts when he would read many books by the same author.

Hands-On Experience
What sparked Steven's interest in physics was taking an advanced placement class in physics his senior year of high school. Instead of having to memorize formulas or facts, Steven learned the basic principles of physics through experiments.

Steven was drawn to physics because it explained the life around us. In addition, he was interested in how using essential physics knowledge and theories to do experiments could lead to the development of valuable wisdom and knowledge about the world.

The Magic of a Good Textbook
Although Steven liked physics in high school, he could have easily left the physics path when he reached college because the material in his first classes was presented in such an uninteresting way.

However, Steven’s interest in physics was saved by something unexpected: a textbook. It is rare to find anyone who credits a textbook for making a subject interesting, but Steven was intrigued by how the textbook made physics fascinating and meaningful.

For a so-called “academic black sheep”, Steven Chu has undeniably shown his ability to use physics to not only explain the world, but also change the world.

Try It!
What enabled Steven to advance so far? Steven enjoys variety and seized most opportunities that were open to him.

The joys of physics experimentation and collaboration have allowed Steven to conduct research, motivate young scientists, and create new energy initiatives. He has researched a variety of physics topics ranging from musical note reception to lasers to renewable energy, been a professor, and managed a large lab.

Before he was selected to be the Secretary of Energy, Steven was the Director of the Department of Energy’s Lawrence Berkeley National Lab, where he redirected much of the main research focuses to issues concerning greener and cleaner solutions for preserving the environment through science, whether it's physics, biology, medicine, or engineering.

Be Open to a Change of Scenery
Steven was willing to move to his jobs and has lived all over the United States. What Steven considers important is a wide, encompassing view of science. He recommends a willingness to be flexible.

Keep Learning
Essentially, Steven believes in broadening your own knowledge in order to expand your view of the world. A knowledge of other areas of science and life will enable you to be more innovative.

Know Your Professors
Even though Steven maintained good grades and was studious, he was not accepted by any of the Ivy League schools he applied to college. He quickly realized that the key wasn't the school as much as the professors. When he met dedicated professors with an enthusiasm for physics he took their classes and pursued their advice.