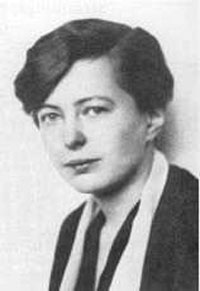 Help recognize and enhance outstanding achievement by a woman physicist in the early years of her career by donating to the Maria Goeppert Mayer Award!

This annual award was established in 1985 and we are working to increase this award from a $3,000 stipend to $5,000 so it is on par with other APS awards. This award is designed to highlight women during the early years of her career for scientific achievements that demonstrate her potential as an outstanding physicist.

Maria Goeppert Mayer, who made important discoveries about nuclear structure, is one of only two women to have won the Nobel Prize in physics. But during her early career, she was forced to spend many years in unpaid positions before she was able to obtain a professorship in physics. Nonetheless, she persevered in her research. In August 1948, Goeppert Mayer published her first paper detailing the evidence for the nuclear shell model, which accounts for many properties of atomic nuclei.

Maria Goeppert was born in 1906 in Kattowitz, which was part of Germany at the time. When she was four years old, her family moved to Göttingen, where her father was a professor of pediatrics. In fact, he was the sixth generation university professor in the family, and Maria was later proud of being the seventh generation academic. Her father always encouraged her to grow up to be more than a housewife. It was assumed that Maria would get an education, and she did, even though it was difficult for women at the time.

After attending public school and a college preparatory academy for girls, in 1924 she entered the University of Göttingen, where at first intending to study mathematics. But after attending Max Born’s quantum mechanics seminar, she switched her focus to physics.

Read a full biography in the APS News August/September 2008 issue, This Month in Physics History.

Help recognize and enhance outstanding achievement by a woman physicist in the early years of her career by donating to the Maria Goeppert Mayer Award!

If you prefer to contribute by mail, please make your check payable to the American Physical Society and note [“Maria Goeppert Mayer Award”] in the memo. Mail your gift to Kevin Kase, Director of Development, One Physics Ellipse, College Park, MD 20740.

Help Us Reach Our Goal!

Thank You to Our Donors

The American Physical Society would like to thank these generous donors for their contributions to the Maria Goeppert Mayer Award: