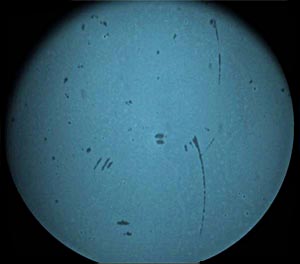 This film depth is 95nm.

The liquid films were made by dissolving 8CB crystal in chloroform. Varying the solution concentration of 8CB created films of different thicknesses. The films were then spin-coated onto polished silicon wafers.

After coating the wafers, the films were slowly heated from room temperature to about 40°C (104°F) in a temperature regulated cell under an optical microscope.

The films in these photographs are different colors because their films are different thicknesses. Each thickness reflects light differently. The blue wafer has the thinnest coating and the brown wafer the thickest. 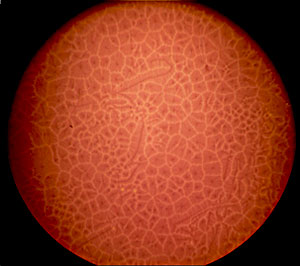 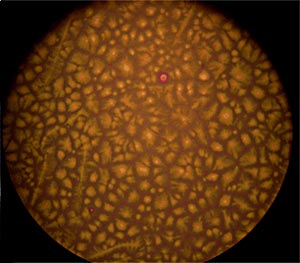 Each picture was taken through an electron microscope, which makes the wafers look globular instead of flat. The depths of the film coatings were measured in nanometers (nm), where one nanometer is one billionth of a meter. Image credits: ©2010 American Physical Society