A cylinder oscillating transversely in water, producing a "centrifugal instability," as shown by fluorescent dye.

As fluid flows over an oscillating cylinder, the liquid closest to the cylinder (boundary layer flow) becomes unstable due to variations in angular momentum.

This image illustrates the onset and development of these Görtler vortices. A cylinder was oscillated transversely using a computer-controlled stepper motor in an acrylic glass tank. To mark vorticity, rhodamine B and fluorescein dye were used on alternate sides by saturating cotton thread with the respective substances, and embedding the thread into thin slits carved on the cylinder surface.

Flow visualizations were obtained via ultraviolet-induced fluorescence and captured with a digital camera.

Understanding the dynamics of these coherent vortical features has important implications in studying pressure distribution on cylindrical structures in ocean engineering.

Aspects of this project are funded by the National Science Foundation. Collaborators include Miguel Canals (APS member) and Geno Pawlak (adviser) of the Department of Ocean and Resources Engineering, School of Ocean and Earth Science and Technology, University of Hawaii. 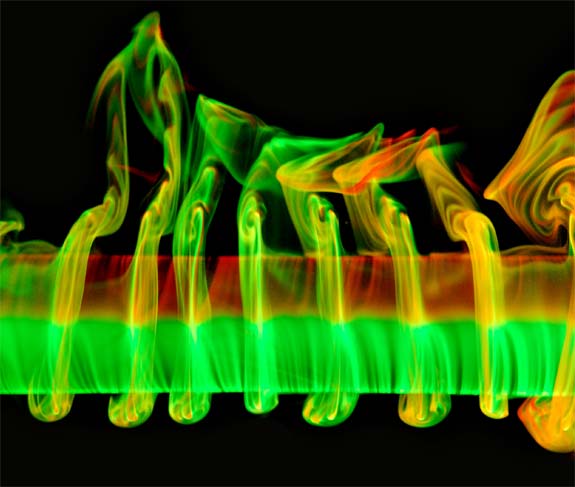