Imagine water going down a sink or bathtub drain.  Vortices form when the cylindrical volume of the water begins to gain angular momentum over the drain.

The goal of this investigation was to visualize the formation of two separate vortices. To create the double vortices, two holes were drilled in the bottom of a bucket.  The bucket was filled with water and allowed to drain out the bottom.  To better see what was happening, the water was seeded with three different colored dyes (red, yellow, and blue).

Unexpectedly, the dyed water clearly showed that in these circumstances, while water was draining from both holes, only one vortex formed.  Most of the water (red, yellow, and the resulting green) swirled down one drain hole while some of the water below that vortex (dark blue) drained into the second hole without a single swirl or swoosh.  Further research should show whether changes in the drain sizes and proximity can create two vortices. 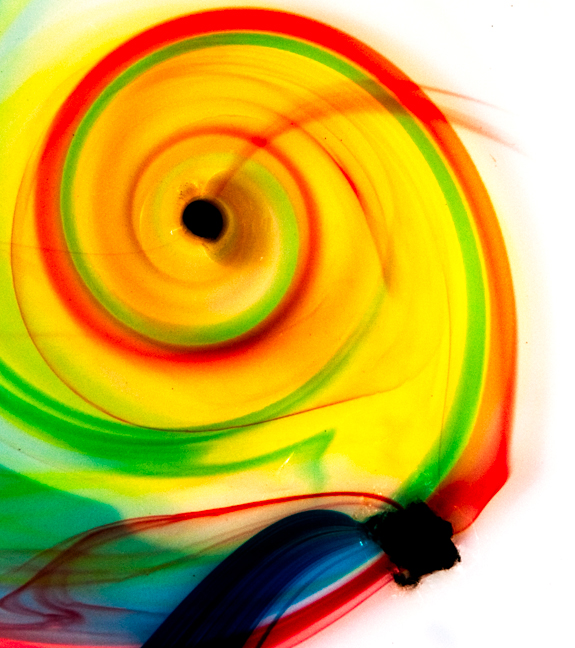 This high-speed photograph was taken without a flash using a digital camera a little less than a meter from the bucket.
Image credit: Jonathan Varkovitzky, Chris Svedman, Peter Mitrano; University of Colorado - Boulder

The Bathtub Vortex image was taken as part of Jean Hertzberg's "Flow Visualization: The Physics and Art of Fluid Flow" mechanical engineering class at the University of Colorado - Boulder, and was shown at the 63rd Annual Meeting of the APS Division of Fluid Dynamics (DFD), November 2010, in San Antonio, Texas.