Topological Defects: Cosmology in the Lab

Cooling a thin liquid crystal film rapidly through a phase transition generates so-called topological defects—points in the image where four dark regions converge. These "knots" in the orderly pattern of the liquid crystal molecules are mathematically equivalent to the topological defects that may have been created in the cosmos by the young, rapidly cooling Universe. Experiments with a superconductor reported in Physical Review Letters support a theory for the formation of such cosmic topological defects. 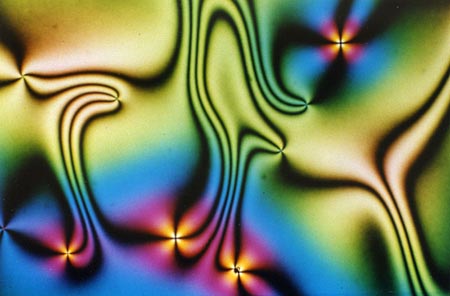 A liquid crystal sample placed between the two crossed polarizers can rotate the polarization of light that penetrates the first polarizer and allow it to slip through the second one. That's what generates the colored portions of the image. In the dark regions, the liquid crystal molecules are aligned with one of the polarizers and can't rotate the light's polarization. So the light is blocked. The sample is illuminated with white light, and the color variations come from the same interference effect you see with any thin film, such as a soap bubble.

The liquid crystal molecules are rod-shaped and like to align with their neighbors. But there can be a slowly varying orientation of the molecules as you move across a sample. As you "orbit" one of the topological defects, the rods' orientation goes through one complete 360-degree rotation.