Bacterial Colony Life as a Microcosm

The image below shows how  a simple microbial system was used to study number (or genetic) fluctuations in range expansions of large populations. In this bacterial colony, chance effects segregate the gene pool into well-defined, sector-like regions of reduced genetic diversity. The domain walls radiating out from the center of the image follow a super-diffusive random walk, and annihilate when they meet.

These results are relevant to the field of population genetics, which is concerned with the genetic variation within populations. The neutral genetic patterns found in the experiment could be a widespread signature of continuous range expansions in populations exhibiting moderate rates of turnover and migration. The research results may thus facilitate the inference of the history of expansions of a species based on the observable genetic variation within the present-day population.

Fluorescent images at 51x magnification of a bacterial colony (E. coli) grown from a mixture of CFP (red) and YFP (green) labeled strains. The red and green areas reveal that number fluctuations can drive the spatial segregation of lineages as a population expands. The inner region of mixed color represents the initial extent of the colony, which was "founded" by a population of 106 initially well-mixed cells. 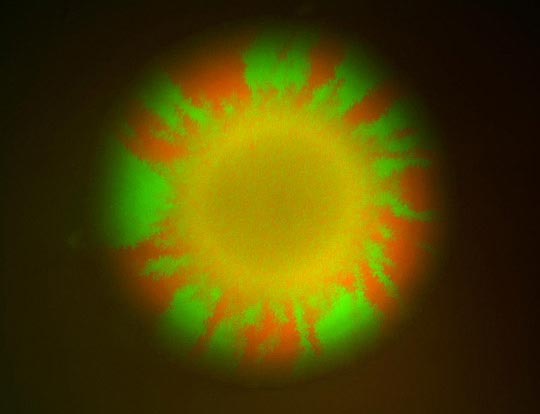