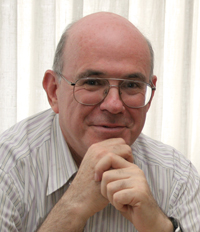 Eliezer Rabinovici is Professor of Physics, holding the Leon H. and Ada G. Miller Chair of Science at the Racah Institute of Physics, Hebrew University of Jerusalem. He received there his BSc (1969) and MSc degrees(1971). He completed his PhD at the Weizmann Institute of Science in 1974. He was a postdoctoral fellow at Fermilab (1975-1976) and at Lawrence Berkeley Lab (1977). He has been at the Hebrew University since 1978 as Senior Lecturer, Associate Professor (1981) and Professor (1985).

His area of research is theoretical high-energy physics, in particular quantum field theory and string theory. He has published over 150 papers and chapters in books. He has also edited several proceedings and compendia. He has been invited to deliver named lectures and many talks at international meetings as well as seminars at the leading institutes in the field.

He was awarded the Miller Visiting Professorship at UC Berkeley (2003) and a Simons Distinguished Visiting Scholar at KITP UCSB (2014). He has been a fellow at the IAS Princeton and a visiting professor at the Michigan-Ann Arbor, Rutgers and Stanford Universities.

He has also been a visiting Professor at several European institutes, among them CERN, a Kramers Professorship at Utrecht (1996), a Humboldt Fellow at Golm/Berlin and Munich (since 2008), a Leverhulme visiting professor at Imperial College London (2011) and a visiting position in SISA, Italy (1989-1993). He was awarded a Blaise Pascal International chair at Paris VI and ENS (2013). He was awarded the Louis Michel visiting chair at IHES, France (2015).

He holds and has held, as a principal investigator, research grants since 1982 in Israel and also in collaboration with American and European scientists.

He serves on the Editorial Board of JHEP and until 2014, was on the editorial board of Nuclear Physics B. He was a member of the advisory committee of many large and small international meetings. He has served for over eight years in such capacities at the GGI Institute in Florence, Italy.

He has been involved in the education of advanced PhD students and postdoctoral fellows not only his own, he has played a key role for over a decade in arranging for high-level, advanced schools: the Jerusalem Winter school in Physics, the Cargese and Les Houches schools in France, and a regional series of conferences in Greece.

Science in general and physics in particular has made significant progress by successfully combining the individual spirit with global collective efforts. My understanding of physics and my own research have been greatly enriched by collaborating with individual scientists from many nations. I have been fortunate to collaborate with other scientists from the Middle East in effective efforts to work together for the benefit of the whole region while respecting the interests of our individual nations. For nearly 20 years I have been one of the leaders in the creation of the SESAME light source, a unique, regional, high-quality scientific laboratory now under construction in Jordan. It actively involves Cypriot, Egyptian, Iranian, Israeli, Jordanian, Pakistani, Palestinian and Turkish scientists and delegates. In the development of SESAME I work closely with US scientists and with APS representatives. I am currently an Israeli delegate to the SESAME Council and SESAME's Vice-President-elect.

I am the Israeli scientific delegate to the CERN Council. I have been for a decade (till 2011) a member of the High Energy Physics Board of the European Physical Society (1999-2012), and am currently a member of the international Council of the JINR, Dubna, Russia.

The acquiring of new knowledge and the satisfying of our human curiosity requires both big science and small science. It requires global cooperation while understanding and respecting our national and personal identities. I initiated and was chair of the Committee for Gender Equality at Hebrew University, which led to new policies supporting the academic careers of women.

I hope to be able to contribute from my experience to improving the mutual understanding between members of the APS and scientists and physicists from other regions for the benefit of the world physics community.