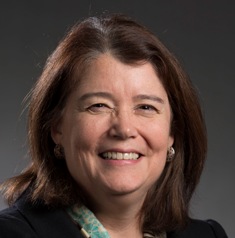 Patricia McBride is a Senior Scientist and Director of the CMS Center at the Fermi National Accelerator Laboratory in Batavia, IL and a collaborator on the CMS experiment at the Large Hadron Collider (LHC) at CERN in Geneva, Switzerland.

Her main research interests are in the areas of experimental particle physics, scientific computing and instrumentation. Her particle physics work has included electroweak measurements and the search for new physics phenomena. She has been part of several international teams that designed particle physics experiments for operations at accelerator facilities at Fermilab and CERN.

She was the Deputy Head of the Fermilab Computing Division where she managed scientific computing for the laboratory. At the same time she served as the deputy computing coordinator for the CMS experiment at CERN during the commissioning and startup phase of the experiment. She helped coordinate the CMS computing activities at the more than 50 computer centers around the globe that contributed computing resources for CMS data processing and analysis.

She is a Fellow of the American Physical Society and a AAAS Fellow. She was elected Chair of the Division of Particles and Fields (DPF) of the American Physical Society and serves as a member of the APS Physics Policy Committee. She is also a member of the Division of Physics of Beams, the Forum on International Physics and the Forum on Physics and Society.

She served as the Chair of the Commission on Particles and Fields (C11) of the International Union of Pure and Applied Physics (IUPAP) and was a Vice-President of the IUPAP Executive Council. In her role as C11 chair, she was a member of the advisory committees for many international conferences and served as an ex-officio member of the International Committee on Future Accelerators (ICFA). She is currently the Chair of the US Liaison Committee for IUPAP.

A number of challenges face the members of the American Physical Society and researchers in the physical sciences. Funding for scientific research in the U.S. has been falling which threatens to limit the opportunities for the next generation of scientists. There is an increased need for strong leadership that is able to communicate the value of research in the physical sciences and to engage the global community of scientists who are members of the society. As Chair-elect of the Nominating Committee, I will work to attract the passionate leaders needed to shape the future American Physical Society.